The five-star excellence of The Hunger Games and its first sequel Catching Fire gives way to four-star goodness in the instalment-before-last of the electrifying journey of Katniss Everdeen (Jennifer Lawrence).

The reduction by one star does not necessarily mean a decline in quality. The decision to split the final book in Suzanne Collin’s trilogy into two parts means that The Hunger Games: Mockingjay Part 1 feels like a deep breath being taken before an onslaught begins; the calm before the storm.

The film is concerned with the build-up to the eagerly-anticipated final confrontation between Katniss and her nemesis President Snow (an eye-twinklingly evil Donald Sutherland reprising his role) and the inevitable explosion of the rebellion of the districts against the Capitol; events which will obviously consume the final part scheduled for release a year from now.

Events here pick up pretty much where they left off, when Katniss was airlifted from the ground moments after she brought the brutal Quarter Quell to a premature end, by shooting an arrow into the forcefield above the arena.

She awakens in an unfamiliar place, District 13, a place she thought had been destroyed many years before during the original war in Panem.

Led by President Coin (Julianne Moore), District 13 is an underground community leading a secret rebellion against Snow and the power-makers in the Capitol, which is spreading throughout the remaining districts.

That rebellion needs a face and Plutarch Heavensbee (Philip Seymour Hoffman) plans to groom Katniss to be that face. She has other ideas, however, more concerned with the fate of Peeta (Josh Hutcherson) left behind in the arena and now Snow’s prisoner.

Heavensbee and Coin must persuade Katniss to accept her fate and muster all her strength and courage to spread her wings and fully embody the Mockingjay symbol.

Part 1 is certainly a little short on action, yet we get to see the political wheels spinning as the rebellion begins to take hold.

It has always been one of the films’ strengths that the very human and relatable emotions make up as important a part of the narrative as the Games-derived action.

In this instalment we also get to spend some angst-filled quality time with the woman who has been at the heart of the stories so far, and once more the film is carried effortlessly by Lawrence, who may not really get to showcase her trademark remarkable physical skills here, yet she opens up a tad to reveal the many battles she faces with her many demons.

In this instalment we get to spend some angst-filled quality time with the woman who has been at the heart of the stories so far.

Once more, the film is carried effortlessly by Lawrence. Katniss has grown darker and dour, even more than she has been in the previous two instalments, because she is more comfortable as a woman of action than a political thinker or for that matter, a poster girl for said politics and, for the moment at least, she is unsure of her role.

She has always been her own woman and resents being handled. Yet, in the pain and mourning that slowly build up as she wanders around the ruins of what was once District 12, and the growing fear and anger as Snow ruthlessly bombards District 13 in an act of intimidation, we witness Katniss growing up even more.

The film is carried effortlessly by Lawrence

The enormity of what she is to face begins to hit her with full force. As can be expected from this consummate professional, Lawrence throws herself fully into the role with determination and heart and we are with her all the way.

For the time being, the other familiar faces have little of import to do – Woody Harrelson’s alcoholic Haymitch and Elizabeth Banks’s Effie Trinket are still on Katniss’s team. 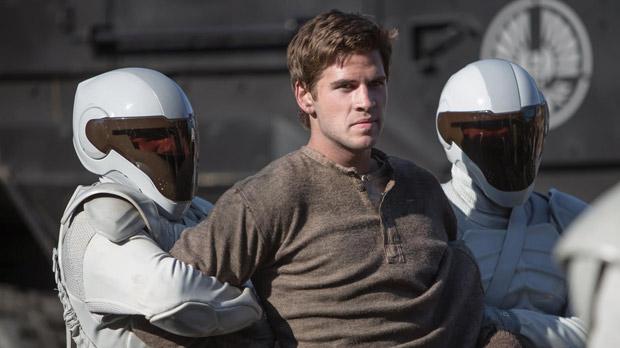 The latter is a shadow of her former self without her elaborate accoutrements. Liam Hems-worth’s Gale still follows Katniss around like a faithful puppy, and, while Hutcherson’s role is somewhat diminished, he gets to show a little bit of depth as Peeta is beaten and possibly brainwashed by Snow and is used as a communication tool in some chilling footage.

Sam Claflin’s Finnick Odair turns up sporadically; while blink and you’ll miss Jena Malone’s Johanna – fingers crossed they get more to do next time round.

I would have hoped for a little more of Philip Seymour Hoffman in one of his final roles, yet he still makes an impact as Katniss’s champion.

Of the new characters, Moore keeps her cards very close to her chest as President Coin. Cautious, charismatic, and compassionate towards Katniss, you wonder what her agenda truly is.

To director Francis Lawrence’s credits, the film concludes on a devastating and emotional cliff-hanger; one would hope that this would be the prelude to the powerful conclusion this franchise and its protagonist truly deserve.