Football sticker collecting used to be only for children. But children, of course, grow up, and in the run-up to Euro 2016, fans of all ages are turning back to that childhood hobby of swapping stickers.

Football stickers have a way of bringing all sorts of different people together. Teachers, mechanics, lawyers and factory workers can all have something in common with an eight-year-old.

As a child, you probably never had the money to actually complete an album – but as an adult it’s a relatively cheap way to get several weeks of entertainment. 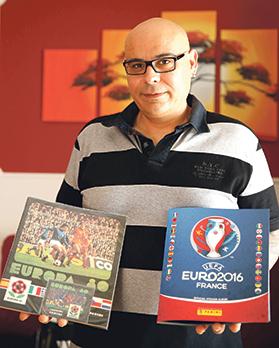 “They are part of my childhood.” – Aldo Bugeja started collecting Panini stickers in 1982.

Aldo Bugeja, 41, is “possibly the most famous Panini football sticker album collector in Malta,” according to Dominic Anastasi, the Panini agent in Merchants Street, Valletta.

Mr Bugeja has all the sticker and cards collections, including all 10 Euro Panini albums.

“The first Euro album was issued by Panini in Italy back in 1980. As I was too young then, I don’t remember this collection but as a collector I managed to buy it later,” Mr Bugeja said as he proudly displayed the three showcases holding his collection.

In 1982 his parents bought him the first World Cup album and together they discovered a new way to have fun – swapping stickers with their friends and carefully pasting them into the album.

Thirty-six years later, leafing through his sticker albums – all of which are, of course, complete – brought the excitement back.

He managed to collect three copies of each Panini sticker albums issued so far, both World Cup and Euro.

“It was my wife who knew how to play the game right,” Mr Bugeja explained.

After managing his feat in just a few weeks, his wife was so supportive of his quest that she convinced him to complete another two books for their siblings too.

Yes, this is a passion

“It was her idea to fill a copy each for our children,” he continued.

“I remember the buzz of getting new packs of stickers to open. First of all, I had, and still have, a passion for football. Moreover, collecting stuff is so much fun – and with friends at school doing it as well, it become a kind of sport,” Mr Bugeja added.

“The 1982 album was released for the World Cup held in Spain and my first Euro album was for the championships held in France back in 1984, two years later.”

“I also have all the cards that Panini has issued till now, and that’s just two albums.”

Mr Bugeja recalled how “as a child there was a sense of community in collecting stickers”. The best part was always swapping them in the playground.

“There was a real sense of achievement when you completed an album.”

The frustration of buying a packet of stickers in a bid to obtain a coveted player, only to get one you already have three of, is a feeling true collectors are only too familiar with.

“Part of the excitement is when a sticker helps you complete your collection. It doesn’t matter if they’re from England or Italy.”

When asked what his wife and children think of his obsession of collecting stickers, he said: “My wife supports me very much as this is the only passion I have, I truly must thank her for this.

“My elder son Alan started collecting stickers in 2010, but the other three are still too young. When a collection is out and I’m home ready to start opening the packets, however, everybody wants to take part, even my wife.”

As of last Monday, he has all sticker and cards collections, including all Panini albums ever released that depict football as a subject.

“My showcases are custom-made. It took me nearly three years to design them in the best way possible.”

Mr Bugeja always keeps his showcases out of bounds and under lock and key.

“I don’t want anyone to touch my collection, especially the youngsters, who don’t know how to handle an album carefully without damaging it.”

Despite the rise of the internet, video games and social networks, this passion still grips hundreds of people.

Mr Bugeja agreed: “Games, social networks and internet can’t replace something you are passionate about. Yes, this is a passion and collectors like me have to wait two years for a collection to be issued, as it goes with the World Cup and Euro every four years.

“You can play games, use social networks and internet every day, but a collection comes out every two years; everything else stops when a collection is out.”

Yet the internet is an important tool, allowing collectors to connect faster. Thirty years ago it was much more complicated to arrange a swap.

“Yes, this is true, but as far as I can remember, the tradition – dating back more than 40 years – of meeting in front of Anastasi’s shop remains as strong as ever in its 21st-century form,” Mr Bugeja added.

“Internet nowadays helps us to swap and enhance our collection much more easily but it is less fun. Meeting in front of Anastasi’s shop still is and will remain a tradition.”

“Enthusiasts trying to complete a collection can always resort to Dominic Anastasi, who has always helped us. You don’t find this in every country, and therefore we must all be grateful to him.”