An adult female honey buzzard from Finland, which last year managed to raise two young and spent a night in Malta in October, has just completed a 25,000-kilometre round trip from Finland to South Africa and back... in vain. The bird arrived in Finland too late to be able to breed and raise its young.

Päivi, as the bird was named, settled down for the night at 7pm on October 3, 2013, in a tree close to Triq il-Kuċċard (Honey Buzzard Street) in Żurrieq. A satellite transmitter harnessed to its back sent a signal recording its location.

To get to Malta, the bird flew for 35 days and covered 3,800 kilometres. In the not-so-distant past, birds such as Päivi would not have lasted long as they glided in search of a roosting place. Honey buzzards were gunned out of the sky and many of them ended stuffed and mounted as trophies in hunters’ showcases.

What a pity! A bird would have struggled to fly 3,800 kilometres and the reward it would get was a load of shot! If hunters stopped to think about it, they would certainly hesitate before pointing their gun and pulling the trigger.

Illegal hunting in Malta has not stopped but it is not half as bad as it used to be. Yet, there is still room for improvement as the number of protected birds that still end up being killed is not negligible.

On the plus side, hunters’ organisations themselves today speak openly against illegal hunting. A mere 30 years ago, hunters used to argue that honey buzzards were fair game.

But Päivi made it! It slept overnight at Żurrieq and, on October 4, left Malta safely to continue its way to Africa. It headed for Hammamet, in Tunisia, and then started its way downwards, flying into Algeria, on to Mali, then to Niger, Nigeria, Cameroon, Congo, Angola, Botswana and, finally, its destination, South Africa, in a place called Reitz, further south of Johannesburg. The trip was 13,100 kilometres long and took 112 days.

What a feat! Yet Päivi is considered to be a slow honey buzzard, though the one that flew the longest distance yet known. Had things in Malta remained as they were in the 1980s, Päivi would not have broken this record.

The story of Päivi’s migration started unfolding at its nest in Vesilahti, western Finland, on August 13, 2013. Päivi reared two healthy chicks. The satellite backpack was fitted as part of a project that started in 2011, which aimed at studying migration by the Museum of Natural History. It involved 40 other honey buzzards.

The project is coordinated by Patrik Byholm, senior lecturer at Novia University of Applied Sciences, and Jari Valkama, a principal investigator at the Zoology Unit of the Finnish Museum of Natural History.

Since 1913, over 4,300 honey buzzards have been ringed in Finland. Of these, 219 were recovered in other countries, including seven that were shot in Malta. 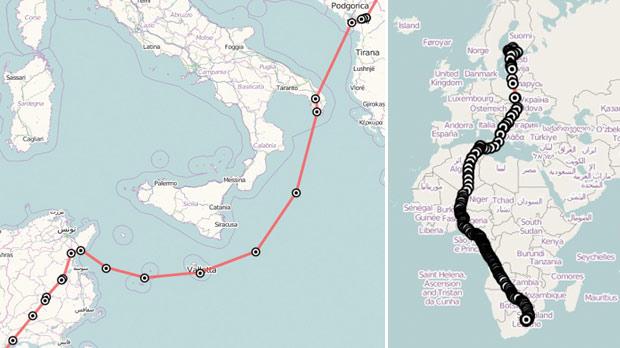 Päivi settled down for the night in a tree close to Triq il-Kuċċard (Honey Buzzard Street) in Żurrieq, on October 3, 2013. Right: The honey buzzard’s route in autumn 2013.

Information obtained from birds ringed in Finland indicated that Finnish honey buzzards migrated to tropical Africa using one of two routes: an eastern route via the Black Sea and Israel or a western route crossing the Mediterranean Sea via Italy or Malta.

The wintering grounds were thought to be in the equator region in Africa but there was no information about how honey buzzards spent their time in winter. But knowledge of the migration routes and wintering grounds of Finnish honey buzzards, as well as knowledge on movements during the breeding time in Finland, was scarce. Hence, the satellite tracking programme was launched.

The transmitters are programmed to gather and send data according to a predetermined schedule. Transmitters weigh less than 30g, are solar-powered and expected to last between three and five years.

The Finnish national broadcasting channel MTV3 has been regularly running stories with updates on the bird that spent a night in Malta.

Päivi is one of the birds that is a clear example of ‘flying in vain’. After flying all those kilometres from Finland to its wintering ground in Africa and back, the bird, despite being an adult, will not breed this year. This is because though the bird arrived safely at its breeding area in Finland, it got there too late to be able to breed and raise its young in time in the short Finnish summer.

In flying back home, Päivi chose a completely different route and did not fly over the central Mediterranean again. Instead, it flew towards Sudan, Jordan, Turkey, Romania and Ukraine, finally arriving in Finnish air space on June 28, going directly to its old breeding territory in Vesilahti.

So, come September, the bird will embark on another long and perilous journey south and then back again. Hopefully, this time it will arrive earlier to be able to breed.

Who knows, maybe Päivi will visit us again!

Natalino Fenech is an ornithologist.