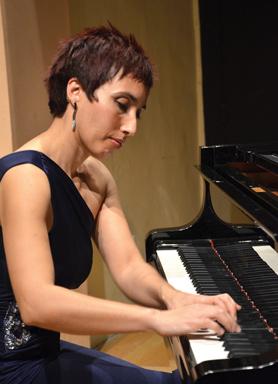 This year’s edition of the Valletta International Piano Festival brought a selection of music by Maltese composers to the fore in Tricia Dawn Williams’s concert entitled Piano Mosaic, held at the Music Room of St James Cavalier in Valletta.

The opening work was Rhapsoidía by Pawlu Grech. Commissioned by the pianist Christodoulos Georgiades, Rhapsoidía was written in 1977, premiered at the University of Athens in 1979 and broadcast on Radio 3 (London) in 1980.

Rhapsoidía comprises three sections, representing birth, death, and rebirth. It, therefore, deals with the transition across different forms of life, which is a key theme in Grech’s art. The outer sections refer to two Greek folk songs, although we do not encounter replicas of the original melodies.

Williams emphasised the changing dynamics of the composition, in terms of the contrasts between delicately played passages and more percussive-like ones which involve note clusters. The idea of infinity was conveyed in the pensive rendition of the final coda.

The concert proceeded with two short compositions by Steven Psaila: Waves and Jogging. Written in 2007, Waves starts off with an aura of stillness which gives way to occasional crescendi. The work gets more melodic in the central section and closes off with an aura of darkness.

Jogging is a rhythmic piece which features some whimsical characteristics describing the related physical fatigue and the impression of renunciation. It also alludes to 1930s film music; a characteristic which was excellently brought out by the pianist.

The subsequent composition was Reuben Pace’s Asteroid Field. This forms part of a larger work completed in 2010 and scored for piano, flute and cello. Asteroid Field is written for solo piano and can be played independently. The composer recounts how this work originates from a dream, where he perceived himself in a spaceship.

Williams offered a haunting interpretation, conveying the impression of other worldliness through the renditions of the contrasting tempos aimed at conjuring up pictures of ‘dancing’ asteroids.

Next on the bill was Karl Fiorini’s Les Ames Effleurées, composed in 2008. This work swings between abstract and more melodic motifs, as frequently evident in Fiorini’s music. The main themes suggest two souls longing for each other and an aura of sophistication is consistently at the fore.

Written in a classical way and inspired by the legacy of études, this is a challenging piece. Having said this, the pianist gave a determined rendition, and I particularly enjoyed the lushness conveyed in the high note motifs.

The subsequent work was Paul Portelli’s Waħdu fis-Solitudni. Completed in 2013, this composition elaborates on a study which Portelli wrote under the tuition of the late Charles Camilleri. It is an overall pensive composition, although it also includes occasional outbursts and some allusions to jazz idioms. Recurring bass notes in the beginning and the ending section suggest a sense of solitude.

The work features an unusual structure, reminding us how thought can cross our minds without any pre-determined pattern. Williams’s rendition brought out the overall meditative qualities of the work.

Next in line were two movements from the Sitt Notturni completed by Alex Vella Gregory in 2011; probably the most melodic works in the programme.

Lejl bla Tmiem starts in an abstract vein, builds into a crescendo and melts into an emotional melody to end on a restrained note. Il-Port il-Kbir bil-Lejl is another expressive work which conjures up the tradi-tion of barcarolles. The composer recounts how the latter nocturne was his response to a boat-ride from Ta’ Liesse towards Birgu. The uplifting middle section represents the magnificent Fort St Angelo, towering over one’s head.

The interpretation of Il-Port il-Kbir bil-Lejl was commend-able for conveying the feeling of friction inherent when rowing a boat. The rendition of Lejl bla Tmiem was more dramatic, bringing out the bleak atmosphere of a dark night.

Last on the concert bill was Pounding by Ruben Zahra, composed in 2007. This is a work in three movements which feature different rhythmic structures inspired by rock music motifs. The original rhythms are assimilated in Zahra’s own idiom, and are thus no longer discernable.

The pianist attacked the tempos in a crisp manner – a characteristic which seems vital in the interpretation of Zahra’s music. This was particularly evident in the third movement, where there is an interesting alternation between an ostinato motif and a more melodious passage.

Overall, Williams seemed to feel more in command as the concert progressed. The diversity across the works and within the works themselves required considerable concentration and vigour. The pianist demonstrated that she could easily swing from one mood to the other, for instance in Zahra’s closing movement.

Mostly written over the past decade, the above works constitute just a shard of contemporary music in Malta. However, listening to this assortment suggests how the respective artists are adopting a variety of musical idioms. Perhaps it is the general concepts behind the works which are less diverse.

For instance why is it that very few of the former compositions seem to engage in some form of social commentary, as often occurs in post-modern culture? Or should we adopt a more formalist view of artworks, where they ought to be interpreted independently of their background?

And more importantly, would a social dimension make such music more relevant to people and ultimately attract new audiences to concert halls?