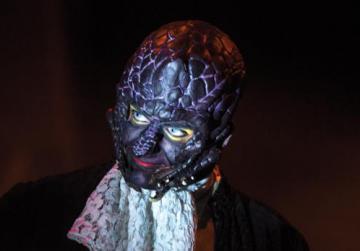 Theatre lore is rich in myth and superstition, as befits the dramatic arts. This is a means of explaining the inexplicable, of dealing with curious incidents which occur during live stage performances, to justify inspiration, good and bad performances and the secrets of perfecting one’s craft.

From muses to ghosts, to goblins and ghoulies, all manner of supernatural phenomena and mythical creatures are described as having an effect on thespians and their environment. In our very own version of this, a new play has arisen, postulating a new local myth and entrenching it firmly in the historical foundations of the Manoel Theatre’s centuries-old traditions.

More Or Less Theatre’s Id-Dlam Taħt it-Teatru is the latest creation of playwright Malcolm Galea and placed first in the category of theatre writing for children and teenagers at the 2012 Premju Francis Ebejer. Debuting for the first time last weekend at the Manoel Theatre – home of the legend it seeks to tell – this new play was refreshingly fun to watch and extremely well scripted.

What was immediately arresting was the snappy, contemporary dialogue, which was peppered with a smidgen of English in just the right places to make it work as a Maltese script in a bilingual society;something I think Galea handled well, since he is more used to writing in English. His winning the prize is testament to his sensitivity to what works on stage, as did his direction – making for a well-blocked and neatly choreographed set of fight scenes.

Did I mention there were sword fights? There were, enough to satisfy any young person’s hidden swashbuckling aspirations thanks to fight coach Jacob Sammut.

With original music by Angele Galea and a multifunctional set by Ray Farrugia, the stage lent itself to a play which started as a rehearsal and developed into a tiff between Sabrina (Naomi Said) and Lexy (Karen Decelis), two budding young actresses in William (Philip Leone-Ganado)’s new play: a period drama about the mythical beastliving in the underground tunnels beneath the Manoel Theatre – ‘il-Kospiku’. This terrible creature rose from the depths of the theatre to watch performances and its disdain for bad acting found its release in his making the responsible cast member disappear and taking his place on stage, taking on human form and making a much better job of it than the original actor.

The dynamic between the cast members was strong and they fed off each other very well. I particularly enjoyed the dyad between the crisply-delivered lines by Said and Decelis, whose comic timing was excellent, and their interaction with Andrew Borg Carabott’s great portrayal of the awkward but kind, shy guy and general stage hand, Eric. The latter fancies Sabrina but is on the brink of being friend-zoned.

The dynamic between Leone Ganado’s William and the stage manager, Gabriel, played by Joseph Zammit, reflected their strong professional and personal friendship and they fed off each other as a pompous director with an ulterior motive and his rather reluctant military subordinate.

Following a cruel joke which Lexy plays on Sabrina, whose insecurities about her acting abilities are affecting her performance, she gets locked inside a chest in the tunnels beneath the theatre and is let out by crotchety old caretaker Alfred, played by Kris Spiteri in one of his best-executed roles to date.

The whole play then develops into a search-and-discussion about the existence of the Kospiku, played masterfully by Luke Brincat, as an erudite, multilingual reptile – the last of his kind and who happened to have more manners than some of the humans who encounter him. With various motives ranging from the nefarious to the sympathetic, the Kospiku is hunted by William and Gabriel and befriended by Sabrina (for inspiration and some seriously magical acting coaching), whose multiple transparent references to The Phantom of the Opera poke fun at the repetition of plots and narrative forms.

With excellent lighting design by Chris Gatt in some very tricky yet effective underground scenes, and a plot which blends mystery with comedy and makes use of basic plotline motifs and elements while keeping them fresh in the complexity in which they’re cloaked, Galea and his very well-chosen cast have managed to create a play which is enjoyable cross-generationally. Indeed it was a pity that it was not as well attended as it should have been.

I’d definitely like to see this performance again at next year’s Żigużajg Festival – certainly not to be missed.