When Maria Vella-Galea is not busy running her public relations and marketing outfit, she is busy collecting travel stamps on her passport. Her latest travel adventure saw her visit the all-time classic Golden Triangle in India. 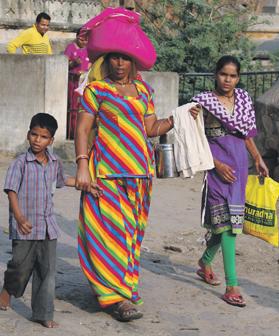 My insatiable wanderlust has transformed me into quite a seasoned traveller. Spanning four continents, so far, my travels have seen me visit 265 cities in 42 countries. But have I seen it all? No, definitely not.

As someone who grew up with a father who instilled in me a love of photography, a trip to India, with photographer Rene Rossignaud, was not something to be overlooked.

Dubbed ‘golden’ for the extraordinary wealth of historical and cultural grandeur, India’s Golden Triangle features what is considered to be the best introduction to three of India’s very best destinations – Delhi, Agra and Jaipur. Hosting many of its great cultural gems, these three cities – home to millions of people – offer a glimpse of this fascinating culture, and a spice-packed, flavour and fragrance rich food scene.

From faded building walls to women’s saris, colour has long been part of the Indian consciousness

Our trip took us from the frenetic pace of Delhi with its bustling markets, magnificent monuments and colonial past, to the city of Agra, home of the mesmerising and unmatched beauty of the Taj Mahal and two Unesco World Heritage Sites, the sandstone Red Fort and Fatehpur Sikri and onto our last stop in enthralling Jaipur, Rajasthan’s capital.

Although Jaipur does not look particularly pink, it is known as the Pink City for its trademark building colour. The formidable Amber Fort built with pale yellow and pink sandstone and white marble is a fine example of Rajput architecture perched on a rocky mountainside.

For a country so vast, our trip could certainly be described as a whirlwind one. Travelling by coach from one city to another, this was also an experience in its own right. It is reported that India has the one of highest frequency of traffic collisions in the world and it comes as no surprise. Roads are often poorly maintained and very heavily congested. Vehicles travelling in the wrong direction, free-roaming livestock, overloaded trucks, buses and motorcycles are the order of the day…

This richly diverse intricate tapestry of history, culture and cuisine is difficult to describe in one or two pages, so I’ve chosen what I considered to be the highlights of my trip. 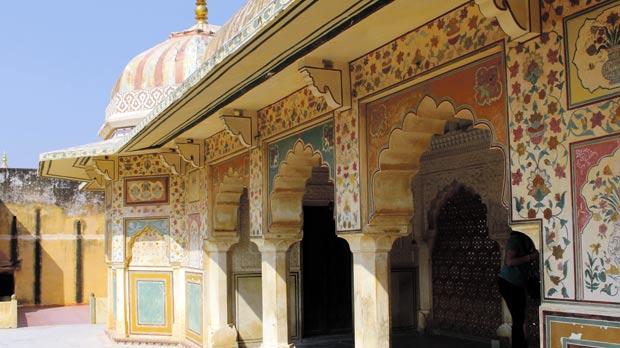 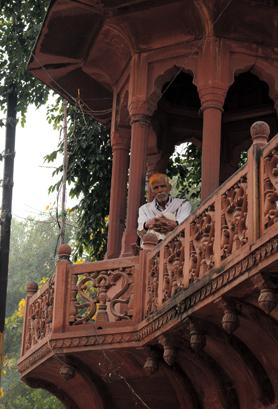 India is an exceptionally beautiful and architecturally-diverse country filled with forts, palaces, mosques, temples, monuments and ancient ruins. Home to the world’s oldest civilisation, architectural styles have evolved under the influence of countless dynasties as well as the colonial period.

Delhi remains one of the oldest surviving cities in the world today and is full of constant reminders of its turbulent history. From the finest examples of Mughal architecture, such as Humayun’s Tomb, to the 350-year-old Jama Masjid mosque – the call to prayer still emanates from its minarets – to the more recent yet for-lorn, British buildings. Build-ings that formerly housed colonial offices are now home to hundreds of dwellers who cook, wash, sleep and live in primitive surroundings.

Agra is home to the most enduring of the Moghul legacy – the extreme beauty of the Taj Mahal, perched above the Yamuna River, resonates with tales of love, devotion and tragedy.

Agra is also home to the formidable Agra Fort, a symbol of power, strength and resilience. The fortifications were built to instil fear and awe, but the formidable exterior gives way to finer proportions and rich ornamentation.

As for Jaipur, the Pink City – while I have an adverse reaction every time I see something pink thrown in my face, Jaipur’s pink colour does give it a vibrant and magnetic feel. Pink denotes the colour of hospitality and was thus chosen by the Maharajah in 1876, when welcoming Queen Victoria to the city. This tradition has been upheld to date. The Amber fort in Jaipur blends Hindu and Rajput elements to produce a white and red sandstone fortress palace overlooking Maota Lake. 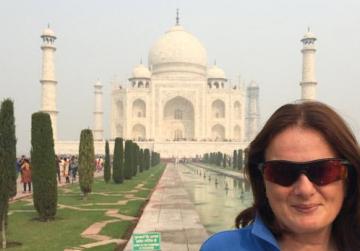 Maria outside the Taj Mahal.

The Taj Mahal – the epitome of love

One of the seven wonders of the world, iconic symbol of India, arguably most famous monument in the world… it certainly deserves a mention of its own. An enduring monument and eternal testament to the love of a husband, Emperor Shah Jahan as a memorial to his favourite wife, Mumtaz Mahal, who died during the birth of their 14th child.

An early morning trip to see the first rays of sun reflect-ing off the glistening white marble of the monument was not entirely successful.

Our hopes of seeing the Taj bathed in the early morning sunshine, were dashed when the day dawned misty. Nevertheless, the conditions still gave it an ethereal feel and its breathtaking beauty was certainly not diminished. 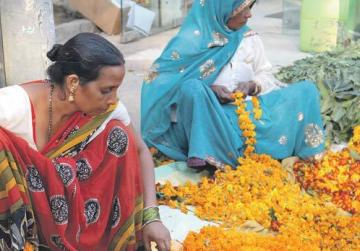 From faded building walls to women’s saris, colour has long been part of the Indian consciousness. The representation of colour influences every aspect of Indian life – religion, politics, festivals and celebrations. Wherever you look, India is full of colour.

Delhi in a Rickshaw

Not the safest, but perhaps the best, way to see Delhi, a trip on a rickshaw is not for the faint-hearted. A mish-mash of people, cars, rickshaws, tuk-tuks, motorcycles, bicycles, goats and an occasional cow intersect… sans traffic lights, of course. But this is how you feel Delhi’s pulse beating, as you make your way through narrow streets filled with people and you wonder how people can live in such a chaotic place. 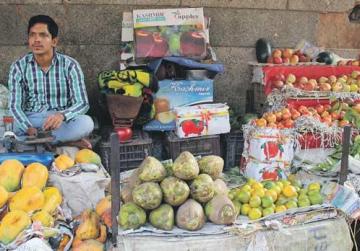 The culture of food

With beef being offensive to the majority of Hindus, its absence on food menus was going to be a bit of a challenge for a hard-core carnivore like me. However, I was pleasantly surprised at the vast selection of food items on the menu.

Indian food, with its mouth-burning spices, cardamom-scented curries, tandoori-baked dishes is rich is flavourful, intense and diverse and meal times were certainly not lacking in choice. A firm favourite of mine was butter chicken or murgh makhani – chicken cooked in a mildly-spiced curry sauce, served with naan bread and jeera rice, which is flavoured with cumin and lightly spiced with whole garam masala.

While not a fan of sweets and trying not to go back home in overly tight-fitting outfits, I must admit I did succumb a few times to Gulab Jamun, which essentially is an Indian version of a doughnut immersed in sweet syrup. A firm favourite during Diwali, it was easy to fall to the charms of this dessert to complete one’s meal.

All good things come to an end

I flew back thousands of miles to return to Western culture I am used to, with a bagful of memories of the chaotic, intoxicating, crazy, exasperating, squalid, daunting, overwhelming country that is India.

Love it or hate it, India overloads the senses with its cacophony of sounds, its vibrant colours and its extreme contradictions.

Will I go back again one day? Possibly, yes.

Think about what interests you and tailor your trip accordingly. The internet is full of reputable sites which can guide you on the varied itineraries. I’m generally into independent travel, not being tied to fixed itineraries. However, in this case, opting for an organised group worked very well for me – something to consider!

India is massive, you will not see all of it in the space of a few weeks. Seeing one place slowly is so much more rewarding than trying to fit in many places and seeing them in a flash. Going slow will enable you to gain a deeper understanding of where you are and absorb the atmosphere around you.

Getting Delhi Belly is something that most travellers to India worry about. Avoid tap water, even when brushing teeth. Avoid any food that may have been washed in tap water at all times. No ice, no salads and no fruit you haven’t just peeled yourself. Going veggie is not a bad idea either and there’s a wonderful selection of veggie food to choose from. Carrying a hand sanitiser is also a good idea.

India is renowned for people who generally take it very easy to process anything from a simple check-in at the hotel to waiting to go through passport control. Unfortunately, there’s no sure way of avoiding them altogether, so try to keep calm no matter what. Just take a deep breath, remind yourself that you are on holiday and try to see the episode as one you can relate to your grandchildren in your later years.

If you can’t beat them, join them. Embracing the chaos is an important part of any trip to India. Endless traffic jams, crowded streets, delays, bureaucratic processes, incessant honking of horns, swerving motorbikes and rickshaws and invasions of personal space is all part of the Indian way of life. Learn to go with the flow, relax, and be at peace with things happening around you.