Archbishop Emeritus Cremona’s leadership of the Church has gone through a number of trying times over the past eight years. Kurt Sansone heads down the bumpy tracks of memory lane.

Two years ago, an e-mail from the Curia announced that the Archbishop had cancelled public engagements after he was advised to rest.

At the time it seemed almost irrelevant, although voices had started circulating that Archbishop Paul Cremona was not well.

As the months dragged on, his public absences became more apparent.

It is around this period in 2012, Mgr Cremona admitted yesterday, that he had started to think about resigning.

The Church had just emerged from a bruising year-long campaign that saw divorce being introduced in Malta in 2011 after voters supported the proposal in a referendum.

It had tested Mgr Cremona’s leadership of a Church that seemed to be losing relevance in an increasingly secular society. The quality and effectiveness of his direction were questioned as the Church failed to deliver a clear and persuasive message on divorce.

The situation was compounded by different priests’ voices, some bringing back memories of the 1960s politico-religious battle. Some had questioned whether the divorce referendum had sealed Mgr Cremona’s fate as an ineffective leader.

Three years later a law that put gay unions at par with marriage was introduced with very little opposition from the Church.

Priests who had spoken to this newspaper throughout the summer, when internal discontent was running at its highest, complained there was very little pastoral direction.

In a 2010 interview with The Sunday Times of Malta, Mgr Cremona spoke about his leadership style: “I am not authoritarian and it is a great challenge for me whenever I have to impose a decision. I prefer dialogue.”

For many, his words were representative of a humble man, described as a good pastor even by critics of his leadership style.

It was this quality that shone in Mgr Cremona’s public engagements but alone it was not enough to energise a Church that was trying to carve out its place in a changed society. But it was not just divorce and civil unions that tested Mgr Cremona’s leadership.

Almost eight years at the helm of the Catholic Church started with a bang as Mgr Cremona inherited cases of sex abuse by members of the clergy that got stuck in the Curia’s investigative mangle.

The issue received worldwide attention during Pope Benedict XVI’s visit to Malta in 2010 when the pontiff held a private meeting with victims and the Vatican’s child sex prosecutor Mgr Charles Scicluna got involved to speed up matters.

A concern closely linked to the Church’s seeming inability to find its voice in a secular society, without being judgemental but at the same time not irrelevant

Two priests were later defrocked and it was left to Mgr Cremona to repair the damage. Whether he succeeded is unclear but the Church’s refusal to offer financial compensation to the victims jarred with Mgr Cremona’s compassionate words after meeting them.

On a parochial level, Mgr Cremona also attempted to reform feasts, a move that fuelled animosity at grassroots level.

Some in the Church lauded the move but lamented the fact that Pro-Vicar Anton Gouder was left alone to face the wrath of feast enthusiasts while others questioned whether the Church should intervene in lay celebrations.

It was a tight rope to walk but critics lamented the Curia’s absence in giving parishes direction on how to manage day-to-day affairs.

Parishes have no standardised way of managing and reporting on finances and each is responsible for setting its own spending priorities.

This means money spent could be skewed towards feasts rather than strengthening catechism structures.

The Church failed to address these problems but critics also pointed towards an outdated Curia management structure staffed by people who held the same post for decades.

Priests increasingly started to complain that the internal Church structures that allow for debate on many of the issues that arise – pastoral, moral and administrative – were not functioning as they should. 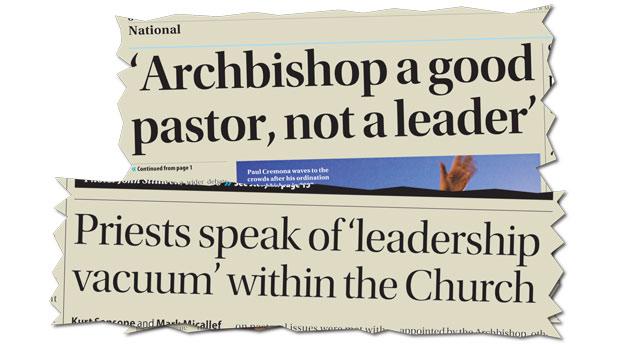 Times of Malta reported unrest within the Church under Mgr Cremona’s leadership in August.

Parish priests, especially the younger generation, complained they lacked pastoral guidance on how to deal with sensitive issues such as cohabiting couples who receive the sacraments, the baptism of children raised by gay couples and divorced people who remarried.

Lack of pastoral direction, they felt, was leading to situations where priests took different decisions, creating confusion among the faithful.

It was a concern closely linked to the Church’s seeming inability to find its voice in a secular society, without being judgemental but at the same time not irrelevant.

These problems were discussed at the start of summer in a meeting of the presbyterial council. Sources had told Times of Malta that there was general agreement that “a leadership vacuum” had developed.

Mgr Cremona had not attended that meeting, which was chaired by Auxiliary Bishop Charles Scicluna.

But for all the lack of decisiveness, Mgr Cremona took a bold decision nobody in living memory had ever taken and stepped down because his health had become a hindrance.

For some, the move was expected but it still caught many by surprise when it was revealed in Friday’s edition of Times of Malta. Despite having sent the letter of resignation some weeks ago, some of his closest aides did not learn about it until it leaked to the media two days ago.

“He is not one to cling to power for power’s sake,” a young priest had said as the wave of discontent grew in the summer months.

It was a sentiment shared by many of Mgr Cremona’s former parishioners, who defended him from what they believed was an unfair onslaught by priests who wanted a vociferous Church that took the side of the Nationalist Party.

While politics may not have been the reason why internal Church criticism surged, it is pertinent that Mgr Cremona’s tenure coincided with a resurgent Labour Party under Joseph Muscat that espoused liberal values.

Dr Muscat was undoubtedly the Church’s most tangible challenger after campaigning successfully for divorce and then getting elected on a ticket to introduce civil unions and renegotiate the Church-State agreement.

Throughout all this, Mgr Cremona steered a cautious course that was welcomed by some, derided by others. Only history will judge whether the road he chose was the best.

Politics aside, Mgr Cremona’s difficulty was probably coming to terms with a reality that even the Synod of Bishops meeting in Rome is struggling hard to understand: a changed society and Catholics that openly question their Church’s teachings.

In his letter to the clergy released yesterday, Mgr Cremona asked for forgiveness from those whom he might have hurt in some way.

The little-known Dominican who caught many by surprise when the Vatican put forward his name had completed his last act of humbleness before giving up the reins of ecclesiastical power.