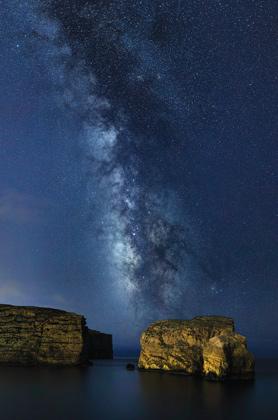 A breathtaking view of the Milky Way dwarfing il-Ġebla tal-Ġeneral (Fungus Rock) from Dwejra, Gozo. This is an image from the album StarScapes of Malta, a series of landscape astrophotography by Gilbert Vancell www.fb.com/GilbertVancell.

Late summer is a great time to see the Milky Way. The occasional spell of cooler weather creates better viewing conditions as it sweeps away the stagnant and moist air which characterises our Mediterranean summers. Look towards the south as from around two hours after sunset from the darkest location you can find and you will soon see the white band formed by millions upon millions of stars in our own Milky Way galaxy.

The second half of September offers the best conditions as the moon will be past full and so will not be illuminating the sky. Can you see it from your home? Light pollution drowns out all the faint stars that form part of the Milky Way, so heading to the countryside will give you a completely different view of the heavens.

The Milky Way is home to over 200 billion stars, our own sun being one of them. When we look towards Sagittarius we look towards the centre of the galaxy, around 30,000 light years away. This is thought to be the home of a supermassive black hole, in a similar way to the many other billions upon billions of galaxies that make up the universe.

The evening skies also offer the chance to see Mars and Saturn, still present as the two brightest objects shining low in the southwest after sunset throughout September, setting by midnight. They will separate further from each other as the month progresses and will fade in brightness as the Earth pulls away from them in their respective orbits.

Early morning risers are still treated to great views of Venus and Jupiter. Regular skywatchers will notice that while Jupiter rises earlier and earlier, Venus gets closer to the sun and swings behind it in October to reappear in the evening sky from November onwards.