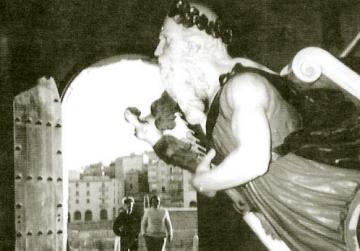 Author Michael Cassar must have been baptised by the salty water of the Grand Harbour if one is to judge by the many books he wrote with such authority on the social and historical aspects of this hub.

Her wood was sold for the manufacture of furniture, doors and windows and rotten part was sold to bakeries, with the result that people suffered lead poisoning

All his publications have recounted – in the minutest detail – fascinating stories linking Malta to the Royal Navy for more than 150 years.

These, the majority of which are large-format, are illustrated with rare period photographs and other reproductions that make them such priceless historical records.

His latest work is a meticulously researched account detailing the 48-year association of HMS Hibernia with the Grand Harbour. The ship was such a permanent fixture of the harbour view until the middle of the past century that a corruption of her name, arbanja, became a part of everyday language, meaning anything large and cumbersome.

Hibernia was a first-rate ship of the line when launched in 1804, with a complement of 850, including the admiral. After serving in the war against Napoleonic France, she remained for a time in the Mediterranean in 1854 as a flagship. But in 1855 she was fitted out at Devonport and sailed for Malta as a receiving ship to replace HMS Ceylon – a naval equivalent of military barracks afloat.

A sequence of photographs in the book show her as a huge hulk that accommodated the crews of ships while they were being repaired or refitted in dock or crews waiting to join a new vessel.

HMS Hibernia assumed a number of roles: as depot ship, base ship and guardship. She had arrived at a time when steam propulsions had taken over from sail and iron hull from wooden walls.

She stood at her fixed berth in Dockyard Creek, a kind of appendix to Fort St Angelo.

After 1855, courts-martial began to be held aboard Hibernia, the most famous of which was that following the loss in 1893 of the flagship Victoria in collision with HMS Camperdown off the coast of Lebanon during exercises, in which 358 officers and men died, including 43 Maltese.

The days of the Arbanja were numbered by the end of the 19th century as conditions aboard her had become somewhat oppressive. Tenders were issued in August 1902 – 110 years ago – for the sale of the ship by public auction. Photographs show her being towed to Pietà Creek for breaking up after she had been sold to Michele Apap for £1,010, later changing hands to another company for £2,100.

Cassar describes how the ship was broken up.

Her wood was sold for the manufacture of furniture, doors and windows and rotten part was sold to bakeries, with the result that people suffered lead poisoning.

But her masts were used in one instance for the carving of the statue of the Immaculate Conception still venerated at the parish church of St Paul Shipwrecked in Valletta. The wardroom door is still the front door of St Aloysius College at Birkirkara.

The life and times of Hibernia conclude with the return of its figurehead of the Celtic god Dagda from the naval museum at Portsmouth to the entrance to Fort St Angelo, from where it was removed a few years before the withdrawal of the British forces from Malta.

The statue today plays a silent tune on the golden harp to the many who visit the Maritime Museumin Vittoriosa.

This book in a way is its narrative!