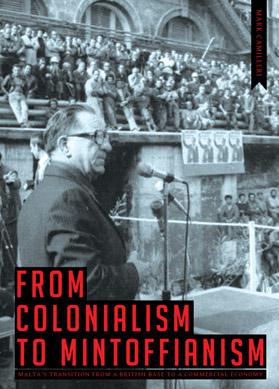 Mark Camilleri: From Colonialism to Mintoffianism – Malta, a Transition from a British Commercial Economy, Self-published, 2012. 245 pp.

Throughout the years, hardly an episode or period of Maltese history remained uncovered. Maltese historiography did not tackle enough economic history as much as other spheres.

Mark Camilleri is a young, talented graduate; his focal point of research is Maltese economic history, in the light of the prevalent political and economic theories.

He examines Maltese economy from the time it was almost exclusively moulded to cater to imperial interests, to the epoch when successive Maltese governments could suit national needs.

The term colonialism needs no definition, while ‘Mintoffianism’ does. The appellation Mintoffianism is bound to attract or repel, especially those who, as the author put it, perceive Dom Mintoff as “the frugal socialist who left the Maltese people bereft of good chocolate”. One definition of Mintoffianism could be a mixed economy inspired by the maverick socialist Mintoff.

Divided into five chapters, the book starts with a treatise that asks: Why Mintoffianism?

Chapter 1 deals with Malta as a colony of an impoverished country. The author traces the causes and effects of British rule in Malta; he consulted a series of sound, secondary sources in putting forward the argument about the development reviewed. He hardly omitted any official reports originating from the British imperial authorities and pertaining to the economic problems of the country.

The political autonomy granted in 1921 created an impetus to all political parties to divert from polemics and to promote new industries. However, during the inter-war period, the success was very limited. One monumental project which exists to this day was the Hotel Phoenicia. This venture not only provoked the opposition of existing hoteliers, but also provoked a debate for the notion of import substitution.

Chapter 2 deals with the political rise of the working class and aspirations for economic development. This chapter could be considered as the core of Camilleri’s exposition.

The role of the workers in the various operations of British defence facilities in Malta characterises the topic. At the end of the war, it became evident that Malta’s strategic importance was in decline. Therefore, the adaptability of the workers’ skills (gained through the British connection) necessitated their ability to switch to more productive pastures.

Camilleri traces the process of the conversion of an economy that almost exclusively depended on military expenditure, to a more diversified economy

Chapter 3 discusses the emergence of development of discourse and its follow-up. Camilleri traces the process of the conversion of an economy that almost exclusively depended on military expenditure, to a more diversified economy.

He goes through this period examining the major reports produced, starting from the first five-year plan.

The subject matter of Chapter 4 is the seeds of economic development and modernity. The advent of the return to power of the Nationalists in 1962 consequently led to independence.

There was a degree of alarm by certain politicians and experts about the economic prospects of ex-fortress Malta. One expert, Prof. Wolfgang Stolper, predicted a 20,000 unemployment figure.

An infrastructure to put tourism as one of the pillars of the economy was set up. The Aids to Industries continued with its endeavour to attract industry.

Critics had raised concern about the high percentage of textile industry being set up – dubbed as promoting ‘cheap labour’, and the value added was not considered attractive enough.

The Maltese entrepreneur showed little interest in industry, except for some import, substitution-orientated, ventures.

Maltese history overlooks the role played by some importers who convinced their principals to open shop in Malta, such as Chatillion (Nylon Knitting), Merit-Werke (Methode), Malta Clothing (V.F. – Bluebell), Paul Green (Menrad) and Francis Busuttil and Sons (Foster Clark), among others.

The book researches its summit focal point in the last chapter, titled Malta’s Last Years as a British Base, hence Mintoffianism. Ever since war broke out, Dom Mintoff (then in Oxford, a Rhodes scholar) was very anxious to return to Malta, as the Warden of Rhodes House wrote, “to use his experience and qualifications to the best advantage in his own country”.

His vision was interrupted in 1949 and 1958, which made him act like a charging bull on his return to power in 1971. Citing Mario Vella: “Industrial activity did not appear as a sustained policy before Balogh and Seers 1955 milestone report.”

Under Mintoff, industrial development became very much integrated with his aggressive foreign policy. He advanced the concept of political and trade missions. The most successful was the German mission, which resulted in the setting up of an office within the Malta Development Corporation. Other successful missions included Libya, France, the Netherlands and Japan.

In addition to deals for oil-exploration, obligations were obtained for the setting up of industries. Some of these initiatives left a mark till this very date: Brandstätter (Playmobil), Duberand (today’s Baxter), Malta-Netherland Pharmaceutical Company (today Actavis) and De La Rue – to mention a few.

Though it would look like a cliché to say that Camilleri’s book fills a void in Maltese economic history, as a matter of fact it does.

It is a very serious, academic effort to examine the structure of Malta’s economy. The book is a valid contribution to a vital branch of Maltese history.