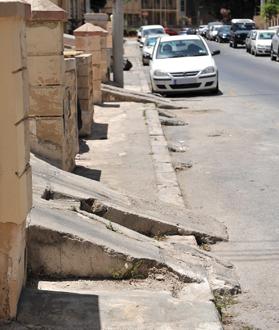 Do I have a right to walk on our pavements? Unfortunately, my answer is an outright no. This is the feeling of many individuals with a disability, like me, who attempt to move around on their own or else in someone else’s company.

The state of the pavements surely does not facilitate accessibility and it is difficult to change the general mentality despite an awareness campaign that has been going on for years. Nonetheless, I’m not the kind of person who gives up and, through this article, I hope to give another good push to the much-desired change.

The main cause of inaccessibility is the structure of the pavements itself. Those who build pavement evidently seem to think that the pavement can be anything but a space where people can walk both comfortably and safely.

We find pavements that are so narrow that one can hardly keep the right balance while walking on them. There are others that are half a metre above street level, flat with the road or just a few centimetres high. Getting on and off high pavements is difficult for everyone but for some people with a disability that becomes an impossible task.

Extremely low pavements can be very dangerous because vehicles can easily mount them and hit pedestrians. Pedestrians with a disability, who need to feel the edge to determine where the pavement ends, can easily walk onto the road.

And what about ramps? Ramps make it easier to get on and off pavements and they mushroomed over the past couple of decades. More are needed but this is not what worries me most. My biggest concern is the existing ramps because they vary in size and, as a result, not all are accessible.

Sometimes, we build ramps just for the sake of having them, without bearing in mind whether they can be effectively used or not. In other cases, we perceive ramps simply as an accessory to our garages, facilitating driving the car in or out. What we often end up with, however, is an alternation of pavements and ramps instead of just one straight smooth pavement and, hence, pavements and ramps that are totally unusable.

In order to have ramps that are accessible to people with a disability, they have to be sufficiently wide and with a gradient that does not make them too steep. Furthermore, they should be bounded by railings on all sides to make them safe. Also, access to and out of ramps should be kept clear at all times.

A common denominator for both pavements and ramps is the kind of material used for their construction. The material that is sometimes used is either slippery or so rough one can easily stumble. We tend to look more at the aesthetic side than at how easy it is for people to walk on them.

It gets worse when pavements and ramps are damaged, at times because of the low quality material used, and are left in that condition for a long time. The end result is that they are not used.

The state of the pavements surely does not facilitate accessibility

What also make pavements inaccessible are the multitude of obstacles of every kind that are placed on them. From experience, I would classify such obstacles in two categories: those of a permanent and of a temporary nature.

Obstacles of a permanent nature can vary from trees to plants and from flower beds to holes in the ground which are intended for the planting of plants or to erect other objects, such as poles, signposts and street furniture.

It ought to be noted that in this country pavements are narrow and, hence, the only real solution is to ensure they are completely clear of any objects.

When objects are placed on pavements permanently, persons with a disability might get used to the situation and, by time, learn how to make their way past them. That is, of course, no solution but at times it can work.

What persons with disability can definitely never get used to are obstacles of a temporary nature.

I would like to point out three situations that particularly annoy me.

My first concern are the vehicles parked on pavements. This is a bad habit the Maltese have and which they cannot get rid of.

Another obstacle that hinders pedestrians, particularly those with a disability, are pavements, jam-packed with tables and chairs in front of restaurants and bars. I appreciate that restaurant and bar owners have their requirements but I expect them to respect passers-by and leave sufficient space for them.

There is then pet excrement and liquid or jellylike stuff on pavements. Such stuff can hinder persons with a disability, whether they notice it or not. It is therefore imperative that such material, which more often than not is nothing but litter, is cleaned off immediately by whoever is responsible.

This is no finger-pointing exercise. What I am focusing on is a bad mentality that needs to change. After all, if pavements become accessible, persons with a disability stand to gain also in terms of the dangers that inaccessibility give rise to. This is a subject that deserves to be dealt with on its own. So, for the time-being, I just hope this contribution attracts the attention of both the authorities and the people in general so that, together, we can make our pavements accessible. Then, perhaps one day I will be in a position to say that my right to walk on our pavements is being finally safeguarded.

Kevin Cutajar is president of the Gozo Federation Persons with Disability.