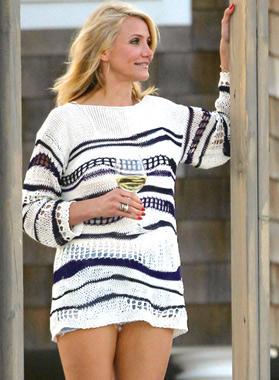 Cameron Diaz in The Other Woman.

The success of Bridesmaids in 2011 demonstrated, not a moment too soon, that female-centric comedies can work. Sadly, this did not lead to an onslaught of titles in the genre. The once heavily-touted Bridesmaids 2 is not happening, at least not as yet and, while this week’s release The Other Woman looked promising, it doesn’t quite escape the confines of predictability. Instead, it is sadly a squandered opportunity to carry the funny torch ignited by Bridesmaids.

The Other Woman purports to explore the comedy potential that results when a man’s wife and his two lovers become aware of each other’s existence… and instead of tearing each other’s hair out, they bond and plot his destruction. When the women are tough New York lawyer Carly (Cameron Diaz), perfect housewife Kate (Leslie Mann) and blonde bombshell Amber (Kate Upton), poor Mark (Nikolaj Coster-Waldau) doesn’t have a hope in hell.

For a film that is supposedly about three women scorned who find empowerment in their flailing relationships, The Other Woman is a tad sexist in its characterisation, and I will admit to being a bit surprised that it was written by a woman, Melissa K Stack.

It falls back all too easily on lazy stereotypes – the brittle female city lawyer, the pampered housewife who happily allows her husband to control her and the dim bimbo.

By the end of the movie, neither of them have changed much. I don’t think it is much of a spoiler to say that they all end up living happily ever after.

Moreover, they each end up meeting the perfect man along the way. So much for the idea of female empowerment.

That Mike is a scumbag philandering husband who does get his just desserts makes little difference. The whole film still has a whiff of misogyny, as the three women struggle to dump him once and for all.

At one point they even argue which of them is going to sleep with him, amid weak protestations so that he does not suspect what is going on.

As for the story itself, it takes a good long while to get to the point, taking pains to underscore the budding friendship between Carly and Kate, and eventually Amber.

In itself this would not be a bad thing, but for the most part, the film is made up of shallow scenes of female bonding to a score full of frothy pop songs.

And their great plans, when they are eventually put into action (to the rather obvious Mission Impossible theme), consist of laxatives, hormones and sticking Mark’s toothbrush in the loo.

A tad sexist in its characterisation

Leslie Mann, usually so reliable and adept at comedy, is saddled with a role that makes her completely unsympathetic.

Her Kate is weepy and shrill, whining in a strident voice that soon begins to grate.

Diaz is frustratingly one-note as the tough-as-nails, no-nonsense lawyer.

Upton has not much more to do than pout and look buxom and say the occasional line that shows that oh, her character is actually rather a bit of a bimbo.

Coster-Waldau, currently making a splash in TV’s Game of Thrones, is completely wasted as the unsympathetic Mike. He is too obviously obnoxious and is never at all funny.