If a spending deficit of $1.2 trillion in six key Asian economies and a rising tide of protectionist rhetoric in Europe don’t seem the most promising combination of business prospects, think again. 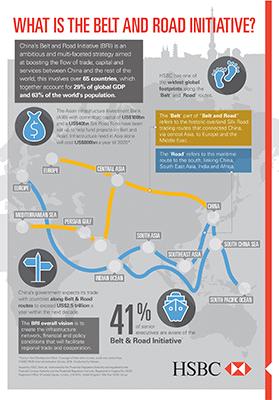 Add in China’s ambitious Belt and Road Initiative, and together they make a compelling case of the potential for a multi-year boom in investment and construction that will create entirely new economic ecosystems.

Belt and Road at its most basic is a strategy to build the transport links and logistics capacity to boost the flow of trade between China and more than 65 countries in Asia, the Middle East, Africa and Europe to an estimated $2.5 trillion annually in the coming decade, from about $1 trillion now.

Meanwhile rapidly-growing numbers of increasingly affluent urbanites in the economies of the Association of Southeast Asian Nations (ASEAN) are fuelling demand for housing, schools, hospitals, roads, railways, airports and other facilities.

Meeting that demand in ASEAN’s six biggest economies – Indonesia, Malaysia, the Philippines, Singapore, Thailand and Vietnam – means investment of an estimated $2.1 trillion out to 2030, according to analysis by HSBC.

That same analysis shows governments currently have plans in place to deliver just $910 billion of it.

Given the right incentives, the private sector can bridge that gap – especially if companies in Asia and Europe can find the right opportunities to work together.

Business connections between ASEAN and Europe are already strong.

Companies from the European Union contribute about a sixth of total foreign direct investment into economies in the 10-nation bloc, according to ASEAN data. The $20.1 billion worth of EU commitments in 2015 were more than twice those from China.

Europe’s commitment to the growth opportunity in ASEAN in the face of economic uncertainties at home has seen annual trade flows increase to $201 billion in 2015 from $147 billion in 2010.

With the increasing urbanisation of populations around ASEAN, infrastructure has become an unmistakable priority for countries across the bloc

Now a new accelerant for economic activity is emerging to drive prosperity for ASEAN’s 625 million inhabitants that could see them grow their consumer spending power to twice that of the UK by 2025.

With the increasing urbanisation of populations around ASEAN, infrastructure has become an unmistakable priority for countries across the bloc.

And this is where China’s Belt and Road Initiative has added a new dimension to the business possibilities.

More than 300 Chinese-funded enterprises had set up in 26 economic cooperation zones in eight ASEAN countries, investing a total of $1.77 billion, by October 2016 under the auspices of Belt and Road projects.

ASEAN economies including Malaysia, Thailand and Indonesia have already launched Belt and Road-related deals with China, with several projects now entering implementation stage and many more in the pipeline.

The planned high-speed rail line running from southern China through Laos to Thailand’s industrial east coast, and a port in Vietnam are prime examples.

European engineering, construction, maintenance, logistics, architecture and business services firms – still battling economic headwinds at home – could and should be firmly in the mix to pick up the opportunities of the anticipated Asian infrastructure boom.

These projects are not one-offs, built in isolation. The connected nature and the underlying intent of Belt and Road means that they must be part of a broader, self-sustaining commercial ecosystem.

Getting those economic ecosystems to function at their full potential will need companies able to reach across national borders and with the vision to see the value of building connections between regions to stimulate business activity that does not yet exist.

Research from the economic think tank, Bruegel, concludes that European nations will be big Belt and Road winners from improvements to transport infrastructure and reductions in freight costs.

Bruegel’s analysis finds that all 10 of the top trade beneficiaries would likely be European – Belgium, the Netherlands, Slovakia, Austria, Hungary, Denmark, Moldova, Germany, Bosnia/Herzegovina and Poland – with an annual trade boost of at least 8.2 per cent each.

When tied with the development needs of ASEAN, this could be the biggest opportunity to stimulate international trade since the creation of the World Trade Organisation, more than 20 years ago.

Perceiving the broader economic opportunities presented by the Belt and Road Initiative will be a crucial differentiator in the decades ahead.