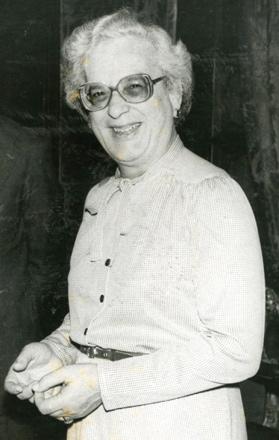 Letters that former president Agatha Barbara wrote to Royal Navy officer Derek Barnes in 1949, when she was 26 years old, expose a sensitive side many are unaware of.

Romantic letters written by former president Agatha Barbara to a Royal Navy signalman who served in Malta in the late 1940s have been unearthed by the man’s sister in the UK.

The letters, dated 1949 when Ms Barbara was just 26, shed light on the sensitive side of a woman who earned a reputation for being a gruff politician.

Ann Wickham, 74, who lives in York, told The Sunday Times of Malta that she recently found three letters signed by a certain Agatha Barbara when she was going through an album that belonged to her late brother Derek Barnes, who was a Royal Navy signalman based in Malta. She had no idea who the woman was, but since one of the letters was sent from “The Palace” in Valletta she made further enquiries and was surprised to find that Ms Barbara was actually Malta’s first woman MP, minister and president.

Fuelled by the tone of the letters, Ms Wickham imagined a budding love between this powerful woman, then 26, and her young brother also in his 20s.

In the letters, copies of which were sent to this newspaper, Ms Barbara tells “Dear Derek” that “I haven’t forgotten you” and that “I hope to see you again someday”.

Now I shall regret that meeting because most probably I shall not be able to see you again, unless of course you are again posted here or I come over there

However, in another she expresses sadness: “I am very pleased to have met you, but now I shall regret that meeting because most probably I shall not be able to see you again, unless of course you are again posted here or I come over there.”

The letters also transmit her passion for Malta and her commitment towards the Labour Party led by Dom Mintoff.

She tells Mr Barnes about the 1949 Labour Party split and assures him that she is not anti-British but is “very much British and proud of it, too, but I am also proud of my Maltese blood in me”.

Mrs Wickham is considering auctioning the letters and donating the proceeds to a Maltese charity with educational objectives – in honour of Ms Barbara’s origins as a teacher.

Read more in The Sunday Times of Malta.