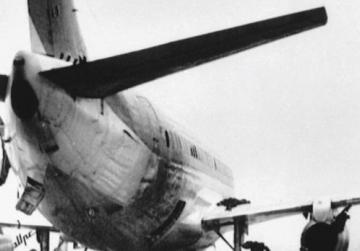 An Air Malta aircraft narrowly missed being involved in a mid-air bomb disaster en route to Cairo in 1981, according to a new book.

Terrorists had timed three bombs, which were smuggled onto the aircraft, to explode when the plane reached the terminal at Cairo Airport, intending to cause a catastrophe for Egypt on the day of Hosni Mubarak’s swearing in.

Since the flight was delayed, the plane was still a long way from the terminal and the bombs exploded on the tarmac as the luggage hold was being unloaded.

However, had the flight been delayed further, the explosives would have gone off in mid-air, killing all on board.

The incident is one of many terrorist plots with a Maltese connection found in the new book Terror’s Footprints: Shadows of International Terrorism over Malta, by journalist Joe Mifsud and edited by Martin Bugelli.

Mubarak assumed the Egyptian presidency on October 14, 1981, taking over the baton from Anwar Sadat, who had been assassinated eight days earlier.

The regional situation was very tense, with many in the Arab world feeling betrayed by the 1979 peace treaty Sadat signed with Israel.

One of the consequences of Sadat’s policy was a falling out with Muammar Gaddafi’s regime.

It reached a point that saw Egypt and Libya ceasing to fly directly to each other’s territory.

Maltese and Italian airlines exploited the situation and were doing brisk business, providing an indirect link between the two countries.

Air Malta ran regular Tripoli-Malta-Cairo flights and on October 13 – the day Mubarak was actually sworn in – the airline made one such journey.

The Air Malta Boeing 737 landed at Cairo airport at around 2pm. It had left from Malta shortly after returning from Tripoli. The flight was running approximately 20 minutes behind schedule.

The passengers disembarked, and as the luggage was being unloaded, disaster struck.

A suitcase on one of the trolleys blew up, damaging the adjacent aircraft, killing an Egyptian loader, and injuring another three workers. A second explosion took place 15 minutes later in the same area, which up to this point had been cordoned off.

A third suitcase, containing another bomb which had not yet exploded, was found later and disarmed by Egyptian security.

Terror’s Footprints raises the question, based on the damage caused to the aircraft, whether one of the bombs was still in the hold of the plane when it took off.

Air Malta at the time issued a statement, playing down the incident as a minor explosion – even though part of the fuselage had to be replaced – and highlighting that none of the crew was injured.

But others had a completely different outlook on the intentions.

The Egyptian Internal Affairs Minister was left in no doubt that the bombs were meant to explode when the aircraft was inside the terminal.

“God Almighty was watching over us and ruined the plan,” he said.

Conversely, had the bombs exploded in flight, it would have been the first such disaster – ahead of the catastrophe seen over Lockerbie in Scotland eight years later, in December 1988, when a bomb in the hold of Pan Am flight 103 downed the Boeing 747, killing all 243 passengers and 16 crew on board.

Malta also has an intricate connection with Lockerbie, seeing that the judges’ verdict at Camp Zeist, which convicted Libyan national Abdelbasset al-Megrahi, rested on the theory that the suitcase bomb originally left from Luqa Airport.

In his book, Dr Mifsud – who wrote extensively about the Lockerbie case also – reiterates his belief that the bomb was not put on the plane in Malta and that the only person who was ever convicted in connection with the atrocity had died in 2012 an innocent man.