Matthew Attard’s latest exhibition examines our obsession with posing for the world, with oversharing and then waiting for its approval. He speaks to Veronica Stivala. 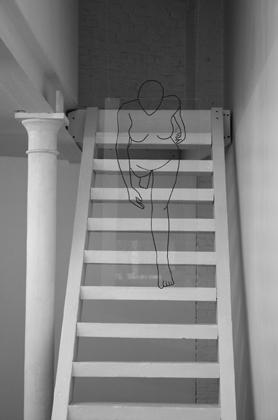 For this exhibition, Attard latched on to the way we present our bodies and transformed it into metal sculptures.

Matthew Attard’s latest exhibition takes the form of black metal wire and paint sculptures. These are outlines of the human form, some with clearly outlined forms, others verging on almost indistinguishable bodies.

The title, You Are a Poser! is an ironic one, because it plays with today’s generation’s obsession with oversharing and actually features five represented poses.

Attard’s forms are halfway between drawing and sculpture. The young artist has designed the space, creating architectural forms from black metal wires that pierce sheets of Plexiglas.

Attard’s motivation for his exhibition came from the way social media has changed the way we interact with each other. He explains: “I think social media broke a boundary which makes us constantly feel the need to update the world about our existence, at least for a number of people. I’m not a psychologist or sociologist, so I do not really know how to explain this phenomenon.”

However, the resulting images of what we are daily exposed to on the internet interest him. He likens internet, and more specifically, social media, to a worldwide stage where we feel free to post images of us. We are constantly testing and selecting our ‘pose’ and waiting for its world approval. 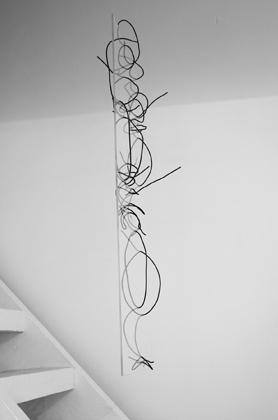 For You Are a Poser! he selected and elaborated upon some pose images which he finds common in our society. “I just visually played and developed upon this, adding the ironic title to it,” he says.

Attard, 26, admits his own obsession with the human body, while acknowledging, that this is not something new. Being obsessed with the body is very much human nature, and is not exclusive to the world of art.

“History shows us a continuous attempt at visually representing the human body or ourselves, and it does not just happen in the world of art. It is evident that in our contemporary times we are daily surrounded with human body images coming from several visual sources. So, of course, this human story of trying to figure out an image of ourselves interests me.”

Attard latched onto the end visual reference, that is, the way we are presenting our bodies, and transformed it into metal sculptures.

His bodies are suspended in air as if engaged in a struggle against the forces of gravity, while the public is invited to circulate among the dismembered bodies in a play of deconstruction and reconstruction.

On their own, the sculptures are nothing. They need visual engagement from the viewer

Depending on the viewpoint, the sculptures disassemble and reassemble themselves. This visual play between abstract and rational figurative views is physically the result of the drawing, materialised through the wire, and stretched into space. The spectator is automatically invited for a slow individual observation experience.

He explains how, on their own, the sculptures are nothing. They need visual engagement from the viewer. In a way, his ideas have strong echoes of Berkeley’s theory of subjective idealism, which denies the existence of material substance and instead proposes that everyday objects like chairs and tables don’t really exist and are only there in our minds.

The images are not ‘really’ there, he says, although some are more obvious than others. They are suggested through a series of simple lines (black wire or paint), and therefore each individual has his own visual experience. Once the viewer understands the pose, we all have our own instinctive reaction, which probably depends upon context.

Attard studied art in Malta. He has lived and worked in Venice, and won an artistic residence for a year in a space in Forte Marghera, from the organisation Eventi Arte Venezia. He has exhibited in Forte Marghera and Galleria A+A in Venice, in the Barbican Centre in London during the exhibition Creative Cities Collection 2012 and at the Water Cube in Peking. In 2013 he had exhibits in Galleria Michela Rizzo, Venezia.

As do many other artists, Attard struggles to explain his art, which is understandable. “I find the act of constructing some visual object quite different from describing it or giving it meaning with words. I just saw a visual sense about this project, and whether this over-exposure was turned into art is something else.”

When asked whether it is difficult to be an artist in 2014, Attard admits he has issues with the term ‘artist’.

“One should not try to be one,” he explains. “The contemporary art world in 2014 is very complicated and has a lot of branches, of which a lot I feel are temporary. What I am trying to do is to develop a visual research and move from one project to another. In order to do this, I think it is important to work in several environments and get involved in things that interest you.”

This is Attard’s first exhibition at the Canal|05 art gallery, a new gallery in Brussels, whose young owners spotted Attard’s work and asked him to exhibit there.

Attard’s work is also currently on show at the exhibition entitled In Between/Viewpoints, which is partially supported by the Malta Art Fund, at Galleria Michela Rizzo in Venice.

In May he will be participating in the Artdate event in Bergamo, where he will have a show at Residenza Casarotto. After that he will be looking for new projects.

You Are a Poser! is showing at the Galerie Canal|05 in Brussels, Belgium until May 23.