Since the rape and murder of a woman on a Delhi bus in December, the number of female visitors to India has dropped 35 per cent. Hannah Wayte asks: just how unsafe is it to travel India as a solo female? 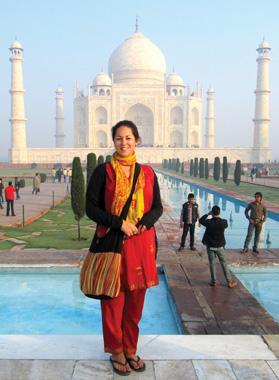 The author alone at the Taj Mahal.

I made my choice to travel alone around India before the events in December happened. Even so, the initial reactions of friends and family when I told them my plans varied from: “That’s amazing!” to “Don’t be such an idiot!”

The naysayers thought of India as a dangerous place for a single female, and worried about me being mugged, or worse.

Personally, I wasn’t too concerned, knowing that most people think of foreign lands, particularly developing ones, with needless trepidation. I knew that the reality is generally nowhere near as scary as the idea of it.

What did put me slightly on edge was the furrowed brow of a friend who had travelled to India herself. She strongly recommended that I find a travel partner, particularly for train and bus journeys, in order to avoid being harassed by local men.

On the other hand, a woman I met, who had visited India many times, reassured me that it was perfectly safe so long as I kept my wits about me.

I experienced a few roaming hands on busy buses, and a night-bus inspector who did his best to make me feel uncomfortable

My first few weeks were spent in Goa, India’s smallest state and probably the most westernised area in the country. It was here that I had my first experience of being photographed.

Lying on the beach with a group of girls from the hostel, I noticed a man crouched down taking photos of us. He then brought his toddler son over and sat him down in front of us, without the slightest acknowledgement of our presence, and went back as if to take more photos.

The only thing that stopped him was our shocked protestations. It was the first time, but not the last, that I felt like a sideshow attraction; one that could be ogled and prodded without question.

Travelling alone had its benefits: I could change my plans on a whim and never had to make compromises. I also found that I fully immersed myself in the experience, more so than if I had a friend to depend upon.

Unfortunately, there were also many drawbacks. I never felt safe walking around alone after dark, so my day generally ended at sunset. In the more traditional Indian states, such as Tamil Nadu, I sometimes felt uncomfortable even during the day.

I also found that it was difficult to get to know any of the locals; I mostly met men (the women were almost invisible, but there’s a story for another day) who mistook friendliness for flirtation and invariably tried to take the conversation one step further.

I met a number of women travelling alone like myself. Sadly, most had at least one story of a moment when they felt unsafe.

One woman told me how a group of men had attempted to get into her hotel room, while another spoke of a lecherous rickshaw driver who took far too many liberties.

I myself experienced a few roaming hands on busy buses, and a night-bus inspector who did his best to make me feel uncomfortable.

The horrible incident in Delhi happened two weeks into my stay in India, while I was still in the south, and naturally made me quite nervous about going up north. It didn’t help that I met a few Indian families at train stations who were shocked that I was travelling alone and warned me to be careful. These same families went out of their way to look after me on some long train journeys and helped me to see a wonderfully hospitable side to the country.

Despite the story on the news and other backpackers’ talk of how unfriendly the people in the north can be, I ended up having a much better time there and felt less conspicuous than I had previously. This proved to me that every place is worth trying, no matter what others have said of it.

Travelling alone as a woman in India was tough. My time there helped me to appreciate the freedom I have in Western society and made me more passionate about women’s rights than I ever have been.

It is certainly easier and safer there with company but I would never discourage a woman from travelling India alone. The thing to remember is that the more difficult situations tend to be the ones from which we learn most about ourselves.

• Cover up. Even better, invest in a salwar kameez or sari. Bare shoulders or legs are a big no-no in India and will create even more unwanted attention.

• Don’t go out alone after dark.

• Plan travel so that you arrive at your destination at a reasonable hour. If this isn’t possible, book your accommodation in advance and request a pick-up.

• Know where you are and where you’re going.

• Carry a whistle. It might seem silly but it can act as a deterrent.

• Know the emergency number. It often differs from one state to another.

• Carry a padlock. Most accommodation will provide you with a door lock but they are also likely to have a duplicate key. Using your own padlock ensures you are the only one able to get in.

• Trust your instincts. If a situation doesn’t feel right, get out of it.