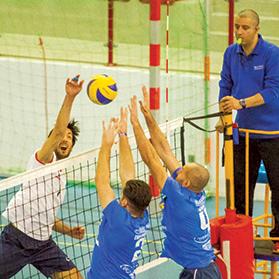 A tight race for the end-of-season play-offs is anticipated in the men’s championship this season. Photo: Julian Calleja

Results from the men’s National Championship over the past weekend have turned the tables around and put Aloysians as possible contenders for the major honour at the end of the season.

What at first seemed to be a two-horse race between Valletta Mapei and Fleur de Lys Twistees has now been extended to a fight between three teams, with Aloysians confirming the improvement shown lately following a hardfought 3-2 win over Fleur de Lys.

Aloysians immediately showed their intentions by winning the first set 28-26, with FDL equalling in another evenly-balanced set, winning it 25-23.

FDL, however, could not find their rhythm, losing badly the third set 25-10 but managing to survive in the fourth. They won it 25-21 to force a fifth and deciding set.

Fleur de Lys started the tie-break on a high note, moving 5-1 ahead.

However, following a time-out by coach Melissa Cheviron, Aloysians started gathering point after point until they closed the set at 15-9 and the match 3-2.

Valletta, meanwhile, obtained their fifth win of the season, beating Mġarr VC in three straight sets, although they had to fight it out in the second with their opponents producing some fine play.

Valletta have now opened a seven-point lead at the top of the standings after five matches. They seem poised to secure top spot before the play-offs stage.

Valletta’s next clash against Aloysians should be an ideal test for the latter team to gauge their progress in the league and the development undertaken in the last weeks.

In the women’s championship, Paola moved to top spot in the Super League following their 3-1 win over Mellieħa Tritones in their last outing at the Cottonera Sports Complex.

Paola took a comfortable 2-0 lead, winning the first two sets with an identical score of 25-17.

Mellieħa played better in the third set, managing to take it 25-23, after leading for the whole session. However, Paola closed the match in the fourth set, winning it 25-16, to chalk up another three points.

In the women’s First Division, Playvolley General Membrane beat Mġarr VC 3-0 in a rather straightforward match, opening a three-point lead at the top of the standings.