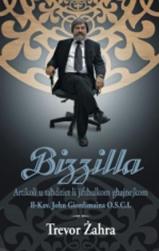 This prolific, inventive and much-loved author has now produced a book supposedly written by Il-Kavalier John Giordmaina, consisting of articles and talks penned by this fictitious author.

Giordmaina is a figure whose ideas on a vast range of topics from ‘the humble cigarette’ to ‘censorship’ or the new entrance into Valletta will evoke many readers’ sniggers or exclamations of impatience.

Other views, perhaps of a more conservative nature, will be greeted by many as being reasonable, though expressed in an irritatingly pompous and self-satisfied manner.

This mixture of narrow-minded views – views excellently portrayed by the actor Michael Tabone in his readings from the book at its launch – and others corresponding to what the acceptable conservative Maltese readily espouse, make the character transcend the level of a satirised buffoon. There are times, however, when Trevor Zahra the humorous writer reaches, and reaches successfully, for the big laugh.

This can be seen when he ends Giordmaina’s attack on Renzo Piano’s designs for the new Valletta entrance with the statement, “Belt bla bieb, Parlament bla ruħ u teatru bla saqaf” (A city without a gate, a Parliament without a soul, and a theatre without a roof.) This epigram sounds too elegant for Giordmaina, though it reflects what he has written, and it is the real author who has now clearly taken over from his puppet.

Through Giordmaina, Zahra shows his contempt for all those bigots who would restrict authors and artists in their work to what is not shocking

Zahra again cleverly makes Giordmaina an ambiguous friend of his. Giordmaina praises him mainly as an author of fiction for the young, but in his piece on censorship he does not mince his deep disapproval of Zahra’s 2008 theatre piece Minn wara ż-Żipp, an uninhibited work written in response to The Vagina Monologues and also Il-ħajja Sigrieta tan-Nanna Genoveffa (also 2008), a novel in which an old woman reminisces about her life, sexuality not excluded. Here, there is no doubt about the author’s satirical intentions. Through Giordmaina, Zahra shows his contempt for all those bigots who would restrict authors and artists in their work to what is not shocking.

Zahra’s satire is just as biting when Giordmaina shows his utter disapproval of sexual behaviour today, especially among the young. This is true especially when he thunders against many young women’s scanty clothing, citing it as an important cause of ultraliberal sexuality.

On this last issue, however, Giordmaina will, I suspect, find many over-60s in agreement with him. Had he insisted mainly on this when he contested the parliamentary election in 1981 he might have received another hundred votes in addition to his wretched 23…

Basing himself on having an uncle who patched up the paint on route buses and painted this or that for the village festa, he considers he has strong artistic genes and sets himself up as an arbiter in the field of art. I, for one, am tempted to agree with his condemnation of most works of conceptual art, but few would go along with him in his statement that since the Renaissance, artists have gone downhill all the way.

His insistence on his being chairman of the Malta Society of Amateur Fretwork Artists, which he considers a confirmation of the high view he has of his own artistic standing, is laughable. But here, perhaps, Zahra’s satire is gentler: amateur societies of artisans and artists tend to make some members see themselves in distorting mirrors.

Giordmaina, a lifelong cigarette smoker, considers smoking to be a superb remedy for warring spouses to make it up, for chairmen of committees to solve problems, and for artists to concentrate on finer points of their art. He asks why the law imposes the showing of grave health warnings on cigarette packets and does not impose a similar condition, say, on commercial airlines. Many cigarette smokers might be tempted to echo him, but fortunately, legislators are unimpressed.

I have touched on just some of the topics broached by Giordmaina /Zahra. I must not close, however, without a word of admiration for Giordmaina/Zahra’s beautiful lists, reading like poetry, for say, the tools and actions of the firework manufacturer. I suspect that Zahra himself shares at least some of Giordmaina’s enthusiasm for fireworks displays.

This author’s many admirers will not be disappointed by this work.