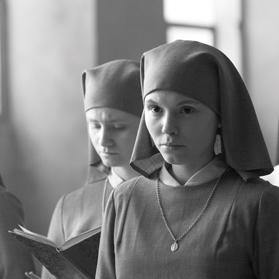 The Polish film Ida arrives on our shores riding a wave of critical acclaim, having won numerous awards at various international festivals, apart from being Poland’s official submission for the Academy Awards for Best Foreign Language Film.

Directed by acclaimed director Pawel Pawlikowski and set in 1960s Poland, Ida tells the story of an 18-year-old novitiate nun Anna (Agata Trzebuchowska) who, on the verge of taking her vows, discovers she is not quite who she thinks she is.

She learns things about her family dating back from the years of Nazi occupation of her homeland. Having led a sheltered life as an orphan and unprepared for the harsh realities of the world, Anna sets out to meet her aunt Wanda (Agata Kulesza).

The two disparate women – the young novice who’s very much a blank slate and the older, wiser woman of the world – set out on a journey during which Anna will learn more about her mysterious and painful past.

Like many films from Eastern Europe, Ida confronts the complex recent history of the region, while dealing with the intimacies of the truth Anna has to deal with, as she discovers more about her tragic history, and in turn, learns more about herself; lessons that prepare her for the life she has chosen.

In newcomer Trzebuchowska’s performance (the actress was discovered in a Warsaw café) is all the flair of an experienced veteran. Her wide-eyed innocence gives way to world-weary wisdom, as she absorbs a lifetime’s worth of lessons in a few short days.

The script is not afraid to deal with mood

As she strides purposefully towards her destination in the film’s final moments, you know she has finally decided who she is and what she wants.

Trzebuchowska is matched beat for beat with the other Agata, Kulesza, whose Wanda is the polar opposite of Anna.

A former prosecutor whose life mission was to punish those who have betrayed the Polish people, she’s a cynical, chain-smoking woman who initially has no time for Anna, yet the innocence she is faced with compels her to undertake this painful journey with her.

Pawlikowski shot the film in black and white, almost as if he wants to strip it of any distractions from his protagonists, and it works, for the starkness of the shots proves to be extremely evocative both of the period ­visually, and of the protagonists’ suffering emotionally. The script is not afraid to deal primarily with character and mood, with the story, ­important though it may be, taking second place.