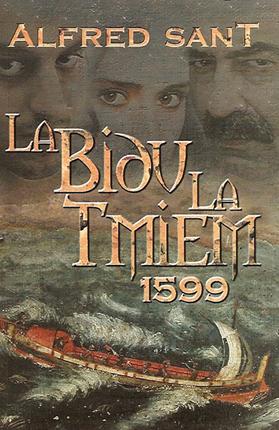 The publishing house Sensiela Kotba Soċjalisti (SKS) is bringing out a revised reprint of Alfred Sant’s novel La Bidu, La Tmiem, 1599 (Neither a Beginning, nor an Ending, 1599).

Originally published by the defunct PEG in 2002, this novel of epic proportions is set in 16th-century Malta and Europe. Sant uses the epoch to illustrate our own times.

The novel takes in such diverse locations as the Miskat caves in Rabat and the grand palaces in Valletta, built explicitly for the Knights and rich Maltese.

The 16th century is defined by the might of imperialist Spain and the Inquisition’s brutality towards individual persons and groups or sects it regarded as heretics.

In Malta the Inquisition would accuse hermits of committing supernatural and heretical deeds and would lock them up in the dungeons beneath the Inquisitor’s Palace at Vittoriosa.

Sant blends a romantic style of writing with an expansive epic genre that is constantly focused on the socio-political and cultural implications the citizen has to contend with.

Few are the Maltese writers who possess the technical and scientific background to examine this context.

It is not surprising, then, that La Bidu, La Tmiem comes across as a historical and cultural document which lovers of serious postmodern literature in Maltese must have in their library.

The author himself describes this work as a historical novel encompassing the past and future, linking literature to social reality.

Earlier in his writing career, Sant had contributed to different publications aimed at the intellectual reader such as Problemi tal-Lum (a Jesuit publication) and Illum under Joe Friggieri’s editorship.

Sant’s articles were known for bringing together of political, economic, social and cultural viewpoints. Within this framework, the author gives vent to his artistic individuality while never failing to deal with humanity’s existential conundrum.

Sant’s academic, administrative and diplomatic training in Paris and Boston (Harvard) works to his advantage as an author as he applies the praxis of the social sciences to literature.

This is why Sant is most prob-ably the foremost novelist of our time. He allows his readers a multi-dimensional interpretation.

The author also wanted to bear witness to a new millennium. The novel takes in the transition from the 15th to the 16th centuries. Thematically, this work is indebted to the author’s aspirations as an individual.

However, these are couched within a broad sweep of events that links the past with contemporary political, social and cultural realities.

The switch from one century to another, as Sant has said about this novel, could be interpreted as the theme of change understood in terms of shifts in the balance of powers.

The only difference is that of context, that is the back-ground canvas. However, the dynamic is immutable.

Making an appearance in La Bidu, La Tmiem are demons that have their equivalent in contemporary society.

In the 16th century women were still regarded as the source of all the sins that besiege humanity. This is an old idea whose origins lie in the writings of the Church Fathers.

Sant’s novel breathes new life into that vast tradition of historical, romantic novels which in 19th-century Malta were written from a religious and patriotic stance.

Sant, however, differs from the rigid formula of the historical novel in that he experiments with postmodern techniques.

Albert Marshall, a close friend of the author and erstwhile theatre collaborator, observed that in the 1960s’ Moviment Għall-Qawmien Letterarju Alfred Sant had been “the newest among the new”, especially in the sphere of experimental theatre writing.

Employing the old framework of European imperialism, with Spain as a superpower, Sant sends a signal (or warning) of a possible future scenario of a world in the grips of globalisation.

Speculation, corruption and fanatic condemnations had culminated in the establishment of the Inquisition and the extremity of condemning to a brutal death thousands of people. Such a fate awaited Giordano Bruno, who was burnt at the stake.

In one particular section of the novel, Sant abandons a strictly narrative style to adopt a technique based on dialogue in the conversation between the imprisoned Bruno and a knight who visits him for reasons that remain vague.

By means of their discussion, Sant examines the most honest means how people can live their lives and express their thoughts. Should we express ourselves fearlessly or employ cunning and hole up just like rats do? Both the Lutherans and Catholics attacked Bruno for his writings and publications, while the Knights (who had bound themselves to celibacy) betrayed their vocation.

La Bidu, La Tmiem is a roomy, expansive novel that attracts admiration even at the level of the literary stamina demanded of the author to produce work of this epic dimension.

The Knights are shown to be mired in ignorance, all pumped up with nothing between the ears, living a life of privilege.

This is one perception about the Order the author subverts in an anti-colonialist manner, a theme Sant had already analysed in his play Aħna u l-Isvizzeri (1989), in which he depicts a Malta hostage to foreign powers.

The book will be on sale at the forthcoming Book Festival and will surely satisfy the large public demand there has been for this work since it sold out more than a decade ago.