Being ‘young, wild and free’ is perhaps one of the most stressful and terrifying states of being the human has to go through. I feel it is a misconception to think that the young person has it all easy when in comparison to the strains of adulthood.

While you may romantically link youth with an image of innocent responsibility, exuberant adrenaline and dreams, a darker side resides along this youthful freedom, one which can be heavy and desperate with the quest for meaning. Seeking to find meaning to one’s existence is certainly fervent in the young mind. Yet, meaning comes and goes and takes the form of many things throughout the process of life. But for meaning to be valid, it first has to be something, for ‘being’ precedes ‘meaning’.

So, simply being in a given moment and/or being one’s honest self are perhaps more important than the elasticity of meaning itself. This is the nature of the paintings by Gabriel Buttigieg which seek to be, rather than solely to mean. In this first solo exhibition, titled Paintings, this young artist presents a series of work which essentially invites the audience into the world of his being.

Another exhibition curated by Michael Fenech, Paintings, clearly presents a close en-counter with desire and sexuality. These pictures are also laced with a concoction of emotions such as intimacy, nostalgia, aggression, conflict and vulnerability, among others, yet one will also find the works to be bluntly bare, not only of clothing. 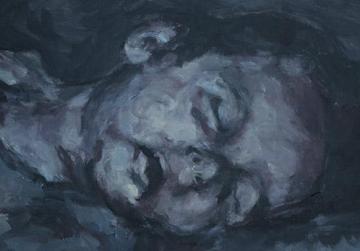 The title of the exhibit reflects this philosophy as, rather than selecting a bravado of words stringed together and causing pre-determined meanings, it is left unadorned allowing for the essence of the word to truly vibrate. Likewise, I feel that choosing the word Paintings for his title presents a reminder to the spectator that these are, in fact, paintings where a subject has been translated into an image through the matter of paint.

It is sometimes very easy to forget the latter and focus only on the first; to put the emphasis on the context and condition of the subject, with little to no regard for the matter. Buttigieg’s work, conceived throughout the summer of 2015, is rich in both subject and the matter. 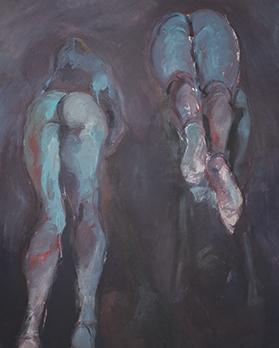 The exhibition is quite the intimate conversation with Buttigieg’s. He is honest about his work, what it means and where it comes from and, perhaps, has little interest regarding where it might go. He is much more concerned with being true to himself, and his art is primarily the vehicle through which these truths are transmitted as presently as possible.

Buttigieg openly tells me of the intimacies behind his work; be they his portraits or his nudes, they are personal on many different levels. Yet, I feel the power behind his art is not through an introverted nature, but quite the opposite. You are invited into a world, yet this world is open to all. It is projecting outwards and not only luring you inwards. The artist also tells me of his fear of rigidity, of all that the cage means for the bird. Thus, his art also reacts to the stiffness and inflexibility that surrounds him. There is, therefore, not one reason behind the artist’s work but a coming together of reasons.

The two thematic strands found in this exhibition include the family and a close encounter with the nude (as opposed to the naked). The artist is well-versed in the rules of the human figure, a knowledge and foundation which allow him the power to break these rules with ease. This can be seen in many of his works, like the firm modelling of the figures in Three Figures (Grey), while the painting Nude (Red) indirectly nods towards the geometrical compositions reminiscent of the Italian Renaissance. I feel that one of the most powerful images of the exhibition is a painting called Summer. There is an obvious sexual connotation present in the female figure, who is engulfed in yellow and magenta flames. But she is also so naturally vulnerable, her bare feet perhaps the most potent symbol of this. 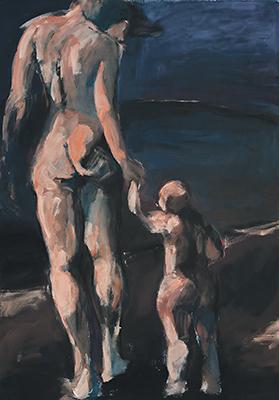 In his work Two Figures (Blue) Buttigieg has captured that suspended moment of freedom, of surrender, as the two women dive into what could be a watery abyss. Another bravado in the rendering of the nude figure – yet, a spirituality transcends throughout this painting.

In Buttigieg’s work, body language plays an important role in communication. This is blatantly apparent in X’inti Tgħamel?, another powerful image on display. The male figure in this painting confronts the viewer head on and it is here that Buttigieg attempts to tackle his demon, his fear of rigidity and confinement, finding resolution in transforming the questions asked of him by his society into statements. This is a clever way of projecting his ‘demon’ onto his audience, leaving them to handle it.

Furthermore, the sexually-charged energy in Dance – whose title makes me recall Matisse yet whose nature stems from a very different source – sees how Buttigieg approaches his canvas with raw energy, applying his paint freely, without any worry and unafraid of where it’ll go. It is also evident throughout his work that instinct takes over in the quest to capture a particular mood or feeling as freshly as possible.

These pictures are laced with a concoction of emotions such as intimacy, nostalgia, aggression, conflict and vulnerability

Almost becoming a physical endeavour, it is essential for Buttigieg to work in large scale as he needs space to capture his expression. Once he completes his work, the artist never returns to modify it, hence sealing this freshness and truly reflecting an intimate moment through a highly personalised language.

The artist is also consistent and controlled, capable of fashioning certain painterly details which come from a concentration of this energy as can be seen in the smaller, more thoughtful works like the portraits. Rather than the exclusive connection with himself, the artist is here more conscious of the connection with his sitters, who are people he knows intimately, as can be seen in Michaela who sweetly looks on through a subtle frame of blue highlights. 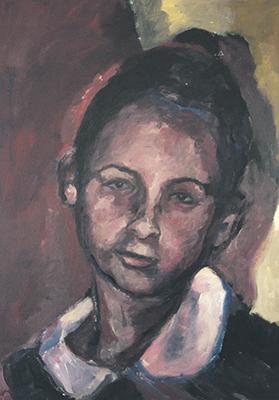 Yet another strong image is Gabriel Rieqed, a self-portrait of the artist dreaming. The choice of palette is both tranquil and chilling and makes me recall Caravaggio’s Sleeping Cupid and Marlene Dumas’s images of children. Finally, the artist also presents his Mother and Child, an easily accessible theme and, perhaps, one of the more sentimental of the collection. Yet, a personal depth permeates the image and it may quickly provide a different experience. However, it is both important and essential to allow these painting to be in the present without attaching too much meaning to them.

Yet, these are aspects which I believe our society might still need to learn to negotiate and accept, even if we are living in the 21st century. It is, more-over, somewhat disturbing to think that we are sometimes more comfortable with images of violence than we are of sexual pleasure. In his first solo exhibition, Buttigieg bares all, his essence as a human being and as an artist.

I invite you all to go have an intimate con-versation with him and with yourselves.

Paintings is done in collaboration with Heritage Malta and supported by Fondazzjoni Kreattivita. It runs until March 13 at Heritage Malta, Melita Street, Valletta.