On Sunday mornings, a little before 11 o’clock, when the third Mass of the day is about to start at St John’s Cathedral in Valletta, a vibrant crowd of white-robed worshippers spills out of the door of the Catholic church of St James, around the corner in Merchants’ Street, and fills the street in an excitable, sociable hubbub.

For many years, but especially since the Arab Spring, with its consequent fallout for Christians in the Levant and around the Mediterranean, this southernmost member of the EU has exemplified the medieval Christian ideal of sanctuary, welcoming refugees driven from their homelands principally by war and militant Islamic movements. 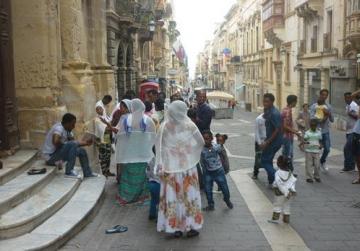 Following the Arab Spring, the many-branched Orthodox community of Malta has grown to over 600 and they have moved to the Catholic church of St James in Merchants Street, Valletta.

The Byzantine Roman Empire, whose legacy re­mains in the many communities of the oriental Orthodox Church, has left its mark all over the eastern parts of the Mediterranean. It is these Orthodox Christians who have borne the main brunt of intolerance and persecution, and partly as a result of this, Orthodox communities have been a prominent feature of the Christian landscape of Malta since the early 19th century.

From Egyptian Copts to Greek Catholics, a whole kaleidoscope of Orthodox Christians, many of whom came as refugees, have found sanctuary in Malta, and they remain a living testament of Christ’s early Church. Those white-robed, African Christians emerging from the ornate baroque church of St James are simply the latest manifestation of the pain, turmoil and tragedy which has been the lot of many Christians who have found that living cheek-by-jowl with Muslims in an increasingly hostile Islamic environment has become impossible. They are Eritrean Coptic Orthodox Christians and, luckier than many of their brethren, they are the ones who have escaped from religious persecution in the Horn of Africa. 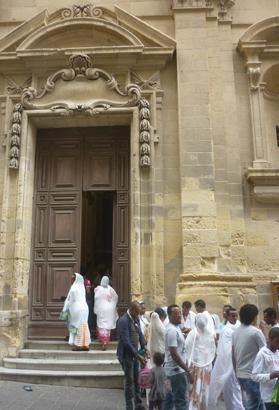 Although war rages between the governments of Ethiopia and Eritrea, the migrants from these two countries in Malta are friends.

Until July 2007, the Orthodox Eritrean community in Malta remained tiny. Their congregation of only 26 had celebrated Mass in the Greek Catholic church of Our Lady of Damascus in Valletta, which had been made available to them by parish priest George Mifsud-Montanaro, a Catholic priest and archimandrite of the Greek Orthodox rite and a leading figure in the many-branched Orthodox community of Malta. Within three months their numbers had grown to over 200, and Mgr Philip Calleja, director of the Emigrants’ Commission, found the Eritreans a larger church, St Catherine of Italy.

More recently, since the anti-Christian eruptions following the Arab Spring, their numbers have grown to over 600 and they have moved to the Catholic church of St James on Merchants’ Street where they have been welcomed by Fr Maurice Mifsud, a great friend of the Eritrean community. Here, joined by Ethiopian Coptic Christians of the Orthodox tradition, they form the second largest refugee community in Malta.

Manuel Fissanaye, of the Maltese Eritrean community, explained this unlikely pairing: “The service is partly in Eritrean and partly in Ethio­pian, so everyone can feel included and able to take part. Although war rages bet­ween our two countries, Ethio­pians and Eritreans here in Malta are friends and blame the wars on the two governments. We have the same skin colour, the same culture, the same religion; we have inter­marriages – we are one people.”

Malta is the southern outpost of a world of succour and a stepping stone to the EU where they hope to join family and friends. Malta is the hand which lifts them from the maelstrom

Fissanaye added that not only had his countrymen found sanctuary on the island, but they had also been able “to heal a deep wound bet­ween our peoples” (Eritreans and Ethiopians), who had been artificially sundered by colonial occupation and internecine warfare.

To reach the sanctuary of this deeply Christian Mediterranean island they have made a harrowing journey. From Eritrea, fleeing an endless cycle of war, they have traversed the hostile territories of Sudan and confronted not only the risks of travelling as a Christian in a fundamentalist Islamic world, but also the appalling hardships and dangers of crossing the largely waterless Libyan desert. Those who were fortunate enough to reach the Libyan coast had then to negotiate the sea crossing to Malta or the Sicilian island of Lampedusa, to reach safety.

Hagos, an Eritrean mi­grant, described his journey with an understatement characteristic of this unshowy people: “I was lucky that our boat didn’t sink. The police in Sudan and Libya don’t care about you – if you don’t give them what they want they kick you and stab you. They were very difficult moments that we spent in Libya.”

Those who survived the voyage in leaky, desperately unseaworthy vessels and eventually found their way to Malta may well consider themselves to have won a kind of lottery. Although usually being detained on landing as illegal immigrants to the EU, it must seem a benign and hopeful imprisonment in comparison to that from which they escaped. 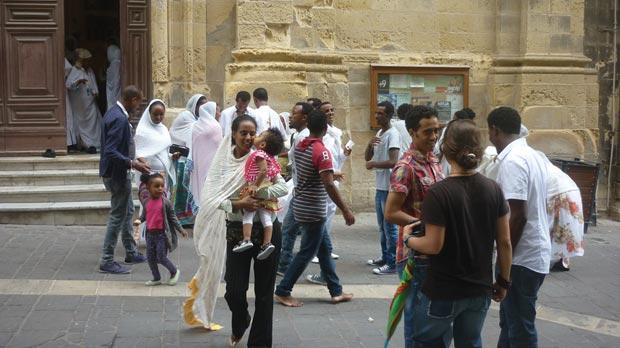 White-robed Eritrean Coptic Orthodox Christians emerging from the church of St James, on a Sunday morning.

Detention is also the start of a legal process by which many of these migrants from war-torn Africa achieve refugee status and the rights to stay and work. Many have gone on to make a life in Malta, especially if they al­ready have contacts on the island, and some have married Maltese and acquired EU citizenship.

The Eritrean community is, to some extent, a transient one, since some of those who, like St Paul before them, washed up on Malta’s shores, have other European destinations in mind. For them, Malta is the southern outpost of a world of succour and a stepping stone to the EU where they hope to join family and friends. Malta is the hand which lifts them from the maelstrom.

From a religious point of view Mifsud-Montanaro is well equipped to straddle the divide between the oriental and occidental traditions of the Christian Church in Malta. Although he is a priest of the Orthodox rite, he and his flock are also in communion with Rome. Unlike the Uniate Church of Ukraine, which has become a focus of division between eastern and western Christianity, Mifsud-Montanaro’s position in Malta is a symbol of a more ecumenical religious culture which fosters union rather than division.

It is a neat metaphor for Malta itself, and it embraces the many other Orthodox Churches of this island in a friendly cohabitation.

Generally the Maltese have welcomed those who have asked for help, and have felt a special solidarity with their Christian brethren who have often made heroic journeys to escape oppression

The Serbian and Montenegrin, (1,000 in number), whose non-resident priest comes from Serbia every four weeks, the Romanian (300) and Bulgarian Orthodox (580), the Russian, Ukrainian, Bielorussian (collectively 1,800), the Armenian, Georgian, Finnish, Hungarian and even Uzbek Orthodox communities, most of whom have no resident pastors, and sometimes no buildings – all are often to be found worshipping in Mifsud-Montanaro’s welcoming Greek Catholic church of Our Lady of Damascus in Valletta, itself a shibboleth of religious harmony. 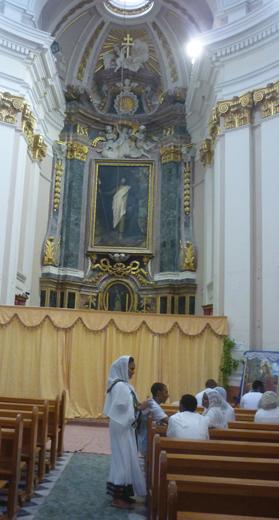 After escaping religious persecution in the Horn of Africa, the lucky few find sanctuary in the ornate baroque church of St James.

For Muslims too, sanctuary has been important. To the in­digenous Maltese community of 450 worshippers have been added 2,000 recent Is­lamic migrants, fleeing intolerance and war. They come main­ly from Somalia, Russia, Uzbekistan and the countries of North Africa, but more are expected, as are Christians, from the inferno which is the Middle East.

Mifsud-Montanaro notes: “There is much tolerance between Christians and Muslims and there is no proselytism. The Imam, Mohamed El Sadi, is a barrister and a moderate man, who eschews the violence of fundamentalist Islam, and refers to the Maltese as ‘tolerant and peaceful people’.

“The Islamic centre, which houses a mosque, has a school which is so popular that over half its pupils are Christians, and Russian Muslims, keen to preserve their own cultural identity, have also founded their own schools. Overall I think that Christian-Muslim relations are good.”

On a more secular level, Mifsud-Montanaro points out that there are, of course, tensions. Some Maltese are resentful of jobs being given to immigrants in hard economic times, and there is an understandable discomfiture at the cultural changes that society is asked to embrace.

But generally the Maltese have welcomed those who have asked for help, and they have felt a special solidarity with their Christian brethren who have often made heroic journeys to escape oppression. Almost always the new migrants are grateful contributors to their adopted country, often taking low-grade jobs not wanted by the indigenous Maltese.

Mifsud-Montanaro’s ass­ess­ment is that the migrants, whether Christian or other, have integrated well. While anxious to keep their own cultural identity, ghettoisation has been avoided, and these refugees have em­braced the need to operate in English, the lingua franca of the island, and within the predominantly Christian culture of Malta.

The archimandrite, who has lived long and seen much, puts it this way: “I think Malta can be said to have been, and to be now a place of sanctuary, and this is something which has been recognised and valued by the many who have sought succour here.”

Washed over by the relentless pulse of history, Malta has been the strategic plaything of great empires and subject to their contrary religious cultures. But the tiny archipelago of Mediterranean islands has emerged as an enthusiastically Christian stronghold, with a reputation for succour and tolerance, in an ocean of intolerance.

Peter Newsham is a freelance journalist based in London and the south of France.