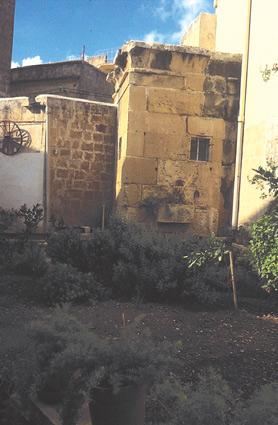 The late 6th century BC Punic structure known as the Żurrieq Tower.

Flimkien Għal Ambjent Aħjar is holding its first heritage talk for 2014 about Phoenician-Punic Malta. Occurring between the two gigantic phases of Prehistoric and Roman Malta, the Phoenician-Punic period of the Maltese islands is often overshadowed by them.

Despite the fact that there are only few surviving architectural remains from the Phoenician-Punic period of the Maltese archipelago (circa 700 BC to 218 BC), the period is in fact very rich culturally.  It is important to remember that writing was introduced to these islands with the arrival of the Phoenicians which means that besides interesting small finds, many inscriptions have been retrieved from multiple Phoenician-Punic sites in Malta and Gozo.

Anthony Frendo, former head of the Department of Oriental Studies as well as that of Classics and Archaeology at the University of Malta, who also specialises in North-West Semitic Inscriptions (especially Phoenician-Punic), will make this shadowy period come alive with his talk about the art, architecture, culture and trade of this community that placed Malta at the centre of the Mediterranean trading routes in the first millennium BC.

The lecture is being held on Tuesday at 6.15pm at the Corinthia Palace, Attard. A €5 donation towards FAA’s art restoration projects is kindly solicited. To book a place send an e-mail to bookings@faa.org.mt or call on 9982 0159.