A team of archaeologists led by Caroline Malone from Queen’s University, Belfast, is sifting through litter dumped thousands of years ago in what is thought to be Gozo’s first village at Taċ-Ċawla.

And the cleaning habits of the Maltese do not seem to have changed much – the first residents used to keep their indoors spotless and, luckily for archaeologists, dump all their garbage outdoors.

“This is a new area of scientific research because the environment and economic world of those ancient people has never been explored,” she said, describing Malta’s prehistoric civilisation as exceptional and unique.

Malta has been chosen for a project in which archaeologists, delving back to the first occupation of Neolithic farmers around 5,000BC, are trying to solve an ancient puzzle: how do some cultures manage to sustain their civilisation for millennia when others collapse because of the changing environmental conditions?

People first settled here about 7,000 years ago and, although the island was probably cleared of most of its vegetation within a few centuries, it supported a thriving, well-populated civilisation.

By 3000BC the megalithic temples had been built and for the next 2,500 years, the isolated society maintained a high culture – with the temples appearing to have been central to the administration of the production and redistribution of food, said Prof. Malone, who is leading the project. 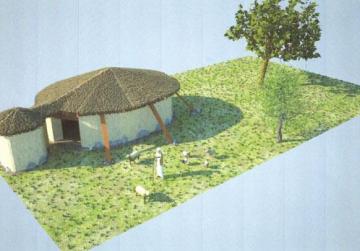 How archaeologists believe one of the earliest houses in Malta would have looked.

Her team has been excavating the site of a Neolithic hut settlement at Taċ-Ċawla since the beginning of April.

A low wall has been excavated which formed part of a house, around four to five metres in diameter. Inside, the house was found to have been kept very clean.

Outside, however, the place was “filthy”, with pieces of pottery, evidence of the manufacture of stone tools and the remains of farm animals.

Nothing pointing to ritual significance has yet been found.

The unearthed bones could shed light on how and when different animals, which included cattle and sheep, were slaughtered, and how their meat was cut up and distributed.

The team is also studying the original vegetation and taking samples of preserved pollen and tiny invertebrates such as snails and insects to reconstruct the changing plant life of the island at different stages.

Previous studies have shown that climate and environment were unstable during the last few millennia BC and this could have affected prehistoric societies.

Prof. Malone and her husband, Cambridge archaeologist Simon Stoddart, carried out fieldwork with renowned archaeologist David Trump between 1987 and 1995, which included the excavation of some 220,000 fragments of human bone from the Brochtorff Xagħra Circle.

The human bones will reveal the diet and diseases of the early population while the remains at Taċ-Ċawla will lead to a better understanding of the way farming changed.

Prof. Malone hopes that when the excavation is over, the site will be converted into a public park and not another garbage dump.