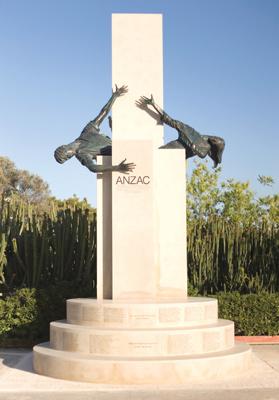 In recent years internationally-acclaimed veteran sculptor Ġanni Bonnici has been working on a memorial to commemorate those Australian and New Zealand troops who fell at Gallipoli during World War I and the battles of World War II.

Bonnici, who is well known for his large-scale monuments found in many localities on the islands, won the competition from five other entries.

The statue was installed at the Argotti Gardens and was unveiled in a ceremony last Saturday.

The concept behind the design of the monument is to capture the symbolical aspect of humanity and not the representation of war and weapons. It is a heroic symbol of those people who defended their countries and died during the war. It is known that in 1915 many Anzacs were wounded during the fighting and were evacuated to Malta from Gallipoli in Turkey, and therefore our country earned the title of Nurse of the Mediterranean.

Bonnici’s design for the memorial includes a man and a woman with open palms and arms pointing to the top of the central pillar forming a triangular shape. The two figures emerge from a number of pillars of different heights and are shown bending sideways from their torso. They express the struggle for survival and the physical embodiment of the spirit of the citizens and the glory achieved after the war. Although it is a figurative work, the artist combined the abstract element of the structures of the pillars with that of the figures.

At the bottom of the monument there is an inscription with the names of 205 casualties who were buried in Malta.

In style the monument is not executed in the usual bold and provincial characteristics, although the heroic posture and installation display a clear break from the classical aesthetics.

Lately, at the age of 80, Bonnici’s stylistic references have been successfully entrenched with a more progressive vision of a mixture of abstraction with the figurative, leaving traits of his past academic principles. His great sense of identification with our national culture and identity is very well shown in this work.