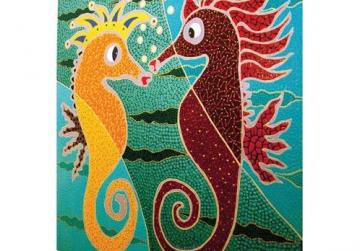 During the event, guests, friends and lovers of art were introduced to Despert and some of his paintings.

Palazzo Citta Valletta is a 17th- century palace situated in the heart of Valletta. Enjoying beautiful views of the capital city and the Grand Harbour, the palace has been beautifully and lovingly restored.

Its courtyard is especially magical, as is the designer penthouse, which provided the perfect backdrop to Despert’s art.

Born in Brittany, France, Despert moved to the French Polynesian island of BoraBora, where he worked in the hotel industry.

However, the beauty of the South Pacific inspired his creative talent. His paintings were discovered by the editor of Town & Country magazine and, as interest for Despert’s work increased, he moved to New York City to pursue his dream.

In 1990, Despert was commissioned to participate in an Absolut Vodka marketing campaign – his image of an Absolut vodka bottle floating in the lagoon of Bora Bora has since then assumed iconic proportions.

Despert’s paintings have been selected for prestigious collections, along with renowned contemporary artists such as Keith Haring, Roy Lichtenstein, Robert Rauschenberg and Jim Dine.

In 2001, after over a decade of painting and exhibiting in the US and Paris, Despert returned to settle in Bora Bora.

After a decade there, he decided to return to Europe and its lifestyle and architecture;in Malta, he found the perfect place.

Despert’s studio is located in Valletta.