The hamlet of Bubaqra, in Żurrieq, is not synonymous with punk. If there is a movement associated with music here, it is the inebriated swaying accompanied by the band marches in the village’s two rival feasts, which culminate in a booze-drenched marċ in the midday sun in the village’s main square... a sea of blue or red, depending whether you’re here in July or September.

His three tattoos – the anarchy sign, the logo for anarcho-punk band Crass and a skull and crossbones with “death or glory” written over it – are a world away from the Catherine wheel or a picture of the Virgin, which some of his fellow villagers have inked onto their skins.

Having been given the stock suburban Maltese upbringing – school with MUSEUM in the evenings, the teenage Falzon moved away from the MUSEUM and into the mosh pit.

There, he discovered punk music, which led to him devot-ing his time to his punk band – Organised Disorder (a name he somewhat cringes at nowadays).

While his band days are over, Falzon is still very much into punk. When I suggest that his art might be a visual branch of the genre, he replies: “You could say that, yes.”

“A lot of artists are not, in my view, committed to one particular genre of music. If I’m listening to music, I’m going to listen to punk – and some 1980s electropop (my guilty pleasures),” Falzon says.

“A lot of times I look within, as romantic as that may sound.

“I’m influenced by expressionism by groups such as Die Brücke, a group of German expressionists, and Edvard Munch, who believed the artist should look within to produce something, very loosely put. I choose to express these using pop elements and I use juxtaposition to say what I have in mind,” Falzon says of his art.

His paintings – which sometimes combine the artist’s own brushstrokes and excerpts from sources as disparate as Haynes car repair manuals and restaurant menus – have a rough and ready quality to them.

This, however, belies the amount of work and thought he puts into them. What appears to be his handwriting in pencil on one of his paintings is actually a monoprint of his handwriting.

It appears rough, but it’s a studied roughness we are dealing with here, whether you like it or not. 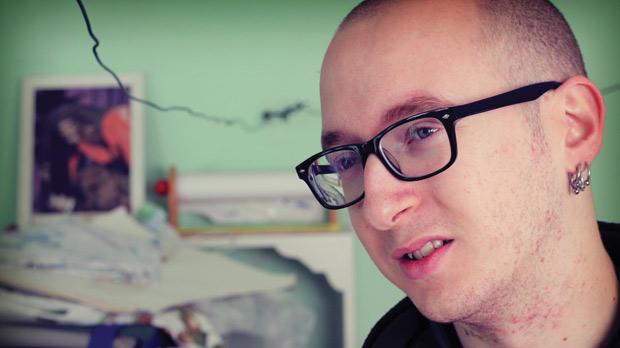 “My work is rough, but I get proportions, expression right,” he says in his defence, pointing at one of his latest pictures with a rough outline of the statue of a Madonna.

“I don’t feel the need to refine it. This is like Gauguin said... in painting there is no end, it’s always open-ended and there’s always a place where to increase. You have to stop at a point you think is interesting.

“You have to take that decision at every painting. You have to look at it through your training,” Falzon says. ­

His training, in fact, led to him being part of the first group to graduate with a degree in Fine Arts from Mcast where, for six months, he and his colleagues were tutored by a group of lecturers from Germany.

“It was very important for me to have been exposed to these international lecturers from abroad. One of them was from Düsseldorf, which is known for its philosophy, others were practising artists from Berlin.

“They gave us good exposure to a different world, it was like having the experience of a foreign university in Malta,” Falzon says of his formation.

Despite punk being known for its rebellious attitude, Falzon actually incorporates his cultural background into his work.

“I believe that if you live in Malta you can’t escape religious belief. Very few people in Malta haven’t been brought up in the Catholic faith.

“I think it’s ingrained within us, and recently I was exploring the idea that this kind of belief was further ingrained in us from before Christianity. Even if you don’t believe in God, you can’t escape the faith you’re living in a country, which is to a point, still Catholic. You cannot get rid of that. I chose to explore it,” the artist says.

One of the works for his upcoming exhibition celebrates his roots – we are looking at a lino print of the statue of a Madonna by the shore of nearby Wied iż-Żurrieq.

The artist still isn’t sure on whether to use a blue veil over the figure in contrast to the black and white landscape behind her.

In fact, while his paintings are an explosion of colour and ideas, his lino prints are studiously carved worlds, most often in just black and white.

Another of his recent works transforms the coastline into a dark maze of lines and ripples – the unified colour scheme allows his craft to shine through unhindered by the roughness inherent in his paintings.

The DIY punk ethic also finds itself in the way Falzon and some of his peers exhibit their work.

Not having a space where to work and exhibit their works, Falzon and a group of other young artists have started a collaboration with the Żurrieq council to use the Xarolla Windmill as an open studio and exhibition space.

The group decides on a theme they can work on, they start work, and then they meet to discuss progress on their respective work.

“There’s a constant discussion which helps a lot and it fills in the void of a mentor,” Falzon says.

“I don’t subscribe to the romantic notion of the artist as a solitary figure,” Falzon says.

“As a group, we work while the windmill is open on weekends, so we work together. That works a lot. Some people came and discussed, some people liked our work, some people didn’t, others asked us why we weren’t outside painting the windmill itself… we’re exhibiting the process, not just the works.”

Ryan Falzon’s exhibition, Ex Voto, runs between September 12 and 26 at the Maritime Museum, Vittoriosa. Ex Voto is a project supported by the Malta Arts Fund.