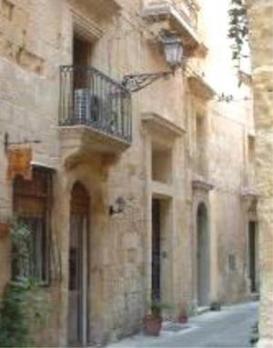 This building lies adjacent to the Auberge de France. These southern French langues were responsible for the administration of the Treasury and Armouries. Although the building was spared the destruction of the war, the original fabric underwent some structural alterations when the building was converted to house small residences. One of the main additions to the façade is the closed timber balcony.

This feature significantly contrasts with the remainder of the building since it was introduced at a later date. Part of the ground floor is used as a shop and although the external changes seem to be minimal, the use is not compatible with the historical importance of the building.

The façade consists of three doorways with the central one being the main entrance. It is also much higher than the other two since there is a plain square-headed ‘loggia’ above the doorway. This ‘loggia’ is crowned by a projecting moulded cornice.

Although the façade provides for three floors, it seems that the central floor is an intermediate level that was included due to the height of the ground floor.

The façade is characterised by heavy moulding around the apertures especially around the windows. These mouldings have been termed ‘Melitan’ mouldings.