I was sitting on the floor, surrounded by a fashionable crowd squatting, or standing, in a large circle. Expectation was mounting by the minute.

A few steps away from us Matti Hemmings, the acclaimed BMX champion, was calmly inflating a tire. Once he fixed his wheel, he put a pair of headphones over his hip-hop style hat, took a selfie, rubbed his hands together and started the show.

No, I was not ditching contemporary art for a BMX competition (though that sounds like a reasonable assumption). I was actually sitting in the performance area Per4m at Artissima, the prestigious art fair in Turin, Italy.

The bicycle Hemmings was fumbling with was not a simple BMX, but a reproduction of Duchamp’s Bicycle Wheel. Not far from him, hidden behind a camera, was the artist who had orchestrated the whole thing, Shaun Gladwell, the Australian artist famous for his work based on subcultures. He was filming the performance, which was actually called Reversed Readymade and was his work for the fair.

There is something possibly more surprising than going to an art fair and finding UK’s best BMX pro riding Duchamp’s bicycle wheel.

This is going to an art fair and finding performance art. Gone are the times when performance art was born as a rebellion against the commodification of art. As Artissima’s director Sarah Cosulich Canarutto put it, all the performances in the new space Per4m were meant to produce material to be sold.

“At Artissima the performance is not simply a collateral event, as it happens elsewhere. It has a commercial value.” Cosulich explains: “In Turin we are innovators and Artissima is famous for experimenting. So why don’t we give a commercial chance to performance art?”

Let’s make a performance with you riding Duchamp’s Bicycle Wheel. And let’s make that pretentious crowd at Artissima watch it

While I reckon Gina Pane – the artist who in the 1970s, at the highest of performance art movement, cut herself with a razor blade while lying on a metal bed over burning candles and stamping out small fires with her bare hands and feet – probably had the answer to that, we couldn’t say we didn’t see it coming.

Commodification has taken communist Beijing. It has taken Johnny Rotten. Why in the world would it have spared performance art? 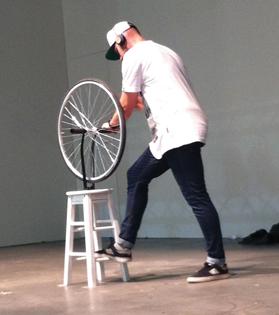 But let’s give a little bit of background. Artissima contemporary art fair was born 21 years ago. At the beginning, it was a traditional fair without performances, one of those art fairs where paintings were sold. Enrico Astuni is the only Italian gallerist who was there since its inception.

Back then, he told me, Guttuso was a best seller and the word ‘crisis’ had a different meaning. But aside from that, the real changes have been internal and they have been introduced by the different art directors.

For this 21st edition, the exhibitors came from Shanghai to Rio de Janeiro, from Cape Town to Helsinki, to transform Turin into a truly international art hub for the week-long show.

“If it weren’t for Italian bureaucracy and heavy taxation, Artissima would easily gain the same recognition as the Frieze art fair,” assured Astuni with an eloquent stare.

This year Artissima features six major sections. Aside from the aforementioned Per4m, devoted to performative works, there is the main section for international galleries; New Entries, devoted to young galleries; Back to the Future, dedicated to solo exhibitions by artists active in the 1960s and the 1980s; Art Editions, with artists’ books and prints; and Present Future, solo shows featuring emerging artists.

What lures young galleries in, though, is the access to a different kind of collectorship, one you wouldn’t find at Art Miami.

This year saw the Athr Gallery from Jeddah, Saudi Arabia’s third participation in Artissima. They are finding it increasingly profitable and dynamic.

Gallerist Joseph Tang, also at his third participation at Artissima, agrees with Athr Gallery’s analysis. Tang noticed that over time people are getting more curious about the features of the artworks.

“Whereas for other art fairs it would be more about selling, here it’s about the curiosity, about the depth of knowing something.”

For Shanghai gallery Aike Dellarco it is the second time at Artissima:

“We had great feedback. Collectors and contacts from last year came back this year. Artissima is one of those fairs where a constant presence allows you to establish a long-term relationship with the European art world.”

Having the gallery relocated from Palermo to Shanghai, it is important for the gallery to parti-cipate in the fair. “We have to touch base with the Italian scene and Artissima is the perfect occasion.”

Watching our BMX champion trying to tame Duchamp’s bicycle on the Per4m stage, I figured that, if everything succumbs to commodification in the end, so be it. At least do it the cool way.

It was actually quite enjoyable to see Shaun Gladwell’s high-brow/low-brow performance. I liked this idea that art is made to be used and experienced. I started imagining Shaun sitting in a pub with Hemmings, bouncing off ideas before a beer.

“Man, let’s climb the Mont Blanc, let’s spend the whole winter in Brazil, let’s make a performance with you riding Duchamp’s Bicycle Wheel. And let’s make that pretentious crowd at Artissima watch it!”

Behind me, a kid asked his mother what was the meaning of the performance. The mother replied with a child-accommodating voice:

“Honey, the wheel on the chair is actually an important artwork by Marcel Duchamp. The original is kept in a museum. But see, that is an everyday guy desecrating it. It means that the new generation is taking down the old one. It’s clearly a provocation.”

I looked at Hemmings’s hat, baggy pants, backpack and headphones. If only he knew that his consciously-casual look and his lanky moves had just pigeon-holed him into the stereotypical young person of commercials!

Years and years of practising BMX, all just to be labelled as ‘the everyday guy’ by the hungry-for-meaning art people. Poor Hemmings.