It could well be enough to make the Magi turn in their graves.

Frankincense, used in incense and perfume, could be ‘doomed’ if current trends continue

Ecologists warned that production of frankincense, one of the three gifts the Wise Men gave to the baby Jesus in a key part of the Nativity story celebrated at Christmas, was in dramatic decline.

A research team from The Netherlands and Ethiopia said their new study had shown numbers of the Boswellia tree which produces the fragrant resin were falling due to fire, grazing and insect attack.

Frankincense, used in incense and perfume, could be “doomed” if current trends continue, according to the research published in the British Ecological Society’s Journal of Applied Ecology.

Production could be halved in the next 15 years if numbers of the tree – which grows in the Horn of Africa and the Arabian peninsula – continue to fall sharply, the ecologists warned.

“Current management of Boswellia populations is clearly unsustainable,” said Frans Bongers, of Wageningen University in the Netherlands, leader of the team that carried out the research in northwest Ethiopia.

He said their models showed that within 50 years, Boswellia populations will have radically declined, and that would mean “frankincense production is doomed.

“This is a rather alarming message for the incense industry and conservation organisations.”

In their two-year study of more than 6,000 Boswellia trees, they found that all populations are declining, not only those that are tapped to extract frankincense.

This led the researchers to conclude that resin extraction was not the root cause of decline, which they put down to an increase in fires, intensive grazing of cattle and attacks by the long-horn beetle.

The large-scale study was the first to monitor the fate of the frankincense-producing tree, according to the scientists.

Factbox on the Boswellia sacra flueck 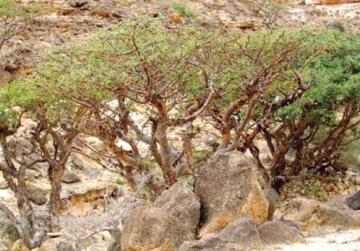 Conservation status: Near threatened according to the IUCN Red List 2008 for Oman, Somalia and South Yemen.

Key uses: Frankincense has a long history of medicinal, religious and social uses. For example, in some Arab communities the gum is chewed to treat gastrointestinal complaints, but should not be swallowed. Boswellia sacra is a tree with papery, peeling bark and leaves clustered at the ends of tangled branches.

Habitat: Desert-woodland; growing on rocky limestone slopes and gullies, and in the “fog oasis” woodlands of the southern coastal mountains of the Arabian Peninsula.

Known hazards: On account of its mildly euphoric and stimulating effects, smoke from burning frankincense is classed as “slightly hazardous” by the World Health Organisation. Swallowing the gum (olibanum) can lead to stomach problems.

The legendary Phoenix bird was believed to build its nest from twigs of frankincense and to feed upon “tears” of the resin.