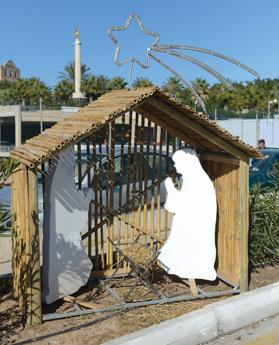 The Baby Jesus set up near the Memorial Monument in Floriana was broken in another theft attempt last week. It will now be replaced and bolted to the manger. Photo: Matthew Mirabelli

Baby Jesus snatchers have struck again, with two gypsum statuettes going missing from their mangers in cribs across Malta.

A total of 42 cribs were created this year by the Environmental Landscape Consortium, responsible for the decoration – 30 more than last year.

ELC started setting up the cribs at the beginning of the month, but two have already gone missing: one in Xemxija and another one in Żejtun.

The Baby Jesus set up near the Memorial Monument in Floriana was broken in another theft attempt this week.

Following similar thefts of Baby Jesus in the past, the consortium has started bolting the statuettes to the manger and is now monitoring the cribs even at night. It has also filed reports to the police.

ELC has been decorating streets for some seven years, and has been setting up cribs for the past five.

In 2008, just two days before Christmas Day, the statues of Baby Jesus and Mary were stolen from a crib on Regional Road.

A week earlier, Baby Jesus was taken from its manger opposite the War Memorial in Floriana. The following year, an empty manger in the Floriana crib raised eyebrows, but ELC said it had been removed after it was placed there too early, to avoid the temptation of having the crib stolen.

That same year however, the Baby Jesus in the crib in Regional Road went missing again.

And soon after, a Baby Jesus was stolen from a crib made of recycled material in the Marsascala playground.

In 2010, the Regional Road Baby Jesus was stolen for the third time.

Some organisers of open-air cribs are now removing Baby Jesus for the night – not just in Malta, but also in the US where statuettes go missing from churches year after year.

Others protect their outdoor cribs with surveillance cameras or even GPS detectors. The theft of Baby Jesus was a plotline in the TV series Dragnet, in 1953, which features an investigation into raid on a church nativity display on Christmas Eve.

In Malta, in 2011, A Baby Jesus collector with an eye for expensive models stole a €300 statue from a Christian doctrine centre in Birkirkara when he failed to find one like it.