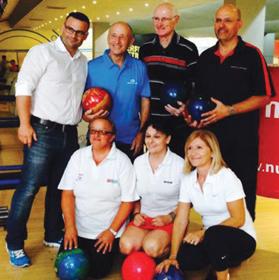 Some of the protagonists of the Senior Championships.

The fifth Senior Championships, organised by the MTBA, was played recently at the Eden SuperBowl, St Julian’s.

The event for 50-plus players saw Paul Baldacchino hold on to his title as Josephine Borg was the top performer in the women’s tournament.

Facing stiff competition from a solid field, Baldacchino had to be on top of his game to keep his title defence bid on track.

He took the lead from the opening game with a 193, just ahead of Roy Swift with a 188 effort.

The pair kept things tight over games two and three, with Baldacchino’s higher scratch efforts in risk of being thwarted by Swift’s far superior age bonus.

With 2013 winner Josephine Bonello unable to defend her title, it meant a new champion was on the cards in the women’s tournament.

Three-time champion Borg (2010, 2011, 2012) was the sure favourite. She led the competition at the halfway point of the six-game series with a 559 total with Mary Galea and Marianne Mula on the chase.

The Senior Championships were also supported by Nutrition Empire.