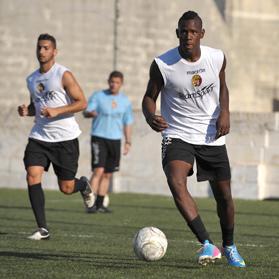 He’s got the same looks and hairstyle as his famous brother, the Italy and Milan stalwart Mario Balotelli. Even his body language is strikingly similar.

Qormi will be hoping that Enoch Barwuah Balotelli will reproduce a tad of his brother’s magic on the field of play after the Premier League club completed the signing of the 20-year-old forward on a one-year deal.

With the news that Balotelli’s younger brother had given his nod to Qormi making headlines yesterday, it was no wonder that the eyes of the Qormi fans who turned up to watch their team’s training session yesterday evening were riveted on the gangly player with the Mohican hairstyle.

Enoch Balotelli’s switch to Maltese football was inevitably met with surprise but the player told Times of Malta that he’s determined to relaunch his career with Qormi.

“I came to Malta because after three days of holidays, I was told that there was a club, Qormi, who were prepared to give me the opportunity to resume training and I accepted,” Balotelli said.

“Last year, I didn’t do that well, I had an up-and-down season. I was in Italy but I didn’t play a lot. Now I’m trying to do my best to play.”

Enoch Balotelli said his move to Malta has the blessing of his brother.

“He (Mario) said it was a good choice,” Enoch said. “He told me that I could go anywhere in the world as long as I give my all.”

In the last few years, Enoch Balotelli has had trials with a host of clubs, including Napoli, Stoke City and Sunderland, but failed to make the cut. Last month, he was strongly linked with a move to Romanian champions Steuau Bucharest but the deal failed to materialise.

Now that he’s made up his mind to play for Qormi, Balotelli is keen to prove himself.

“My objective is to do well this year,” Balotelli said.

“I want to work hard and listen to the coach and his staff. I know I can give a lot and I’m confident but I need the support of the coach.”

Although the mercurial Mario Balotelli has rarely been away from controversy since coming to prominence as a precocious youngster with Inter, there seems to be a general consensus in Italy that he has been revitalised by his move from Man. City to Milan last January.

Over the past seven months, Balotelli has done justice to his reputation as one of the most talented players in the world with a series of electric displays for club and country.

“Yes, he has been reborn (by his move to Milan),” Enoch Balotelli said. “He came in the middle of the season and scored 10 goals, not everyone can do that.

Tommaso Volpi, Qormi’s new coach, intends to have a closer look at Enoch Balotelli in the coming days before deciding whether to retain him as part of his squad for next season or loan him to a partner club, probably Gudja United who have established close links with the football company run by Angela Perez, Volpi’s wife.

“We have a working rapport with (Claudio) Chiellini (Enoch Balo-telli’s agent), who is the brother of Juventus defender Giorgio Chiel-lini,” Volpi said.

“He recommended Balotelli who is a young player born in 1993. Certainly, he needs to grow. We will monitor him for a few days but today, he’s a player of Qormi. He has signed a contract with Qormi.

“Logically, we will do what we think is best for Balotelli. Last year he didn’t play much. We will decide whether to keep him or loan him to a partner club.”

Before taking charge of Qormi a few weeks ago, Volpi had not coached in Malta but he admitted to being positively impressed by the level of the leading clubs here.

“I had been told that Maltese football is not so strong but I’ve seen some matches from the preliminary rounds of the European competitions... I’ve watched Valletta, Birkirkara and Hibernians and they are three teams who can certainly do well in Italy,” Volpi said.

“I wanted to have an experience abroad. In Italy, there are many problems. There are clubs who are not registering for competitions, the situation is a bit chaotic. That’s why I preferred to go abroad. I got the opportunity to work in Malta and I accepted willingly.”

The arrival of Volpi and the anticipated influx of new foreign players have heightened hopes among the Qormi fans of an improved league campaign next season after the Yellow-Blacks missed out on a Championship Pool berth last season and lost to Hibs in the final of the FA Trophy for the second year running.

Volpi insisted that Qormi still have a lot of work to do to reach the level he craves but, when everything is in place, he expects the team to challenge for a top-five finish.

“Qormi is still an open yard because the a squad is still being constructed,” the Italian remarked.

“We have started very late, we have many players on trial. In my opinion, we still lack two important players, a strong centre-forward and a holding midfielder. Only then we can say that we have created a good group and a valid squad.

“Regarding objectives, I’m not used to making predictions but let’s say that we’re hoping that, behind the four important clubs, there will be Qormi.

“There are four to five squads who are well-organised, including Sliema. They are better equipped than us but we hope to be on their heels.”