A court battle over treasure from an old Spanish shipwreck has reached Gibraltar, where descendants of the sunken cargo’s owners are fighting to win back part of the booty from Spain.

The British-administered territory has been drawn into a tangled squabble between Spain, US treasure hunters and the Latin American descendants, in a case harking back to the days of the Spanish empire.

Mathilde Daireaux Kinsky, an Argentinian who lives in Colombia, says part of the cargo of the Nuestra Senora de las Mercedes, sunk by the British in a sea battle in 1804, belonged to her ancestor Diego de Alvear y Ponce de Leon.

A Spanish general in the colonies at the time, he was not on board himself but lost his wife and seven of his children along with his precious coins in the shipwreck.

“We are not doing this for the money. We are seeking respect for the memory of our family members who died on board the Mercedes,” said Ms Daireaux, 49, one of six descendants claiming the treasure in the Gibraltar courts.

Odyssey Marine Exploration, a company that specialises in salvaging deep-sea wrecks, hauled the treasure – mainly gold and silver coins mined and minted in the former Spanish colonies – from the seabed off Portugal in 2007. It transported most of the treasure via Gibraltar, a sunny enclave of British pubs and red telephone boxes at the mouth of the Mediterranean, to Florida, where the company is based. A court in Florida last month let the Spanish government claim this share – 23 tons of silver coins and other items, worth €350 million – and fly it back to Madrid.

But several hundred more silver coins were left behind in a crate in a Gibraltar customs house, where they were blocked pending Spanish legal efforts to claim them, says Daniel Feetham, a lawyer acting for the descendants.

“The descendants have issued a claim in the Supreme Court of Gibraltar and there is an order from the court here preventing these coins from being taken out of the jurisdiction,” said Dr Feetham.

“We do not envisage a hearing for some time.”

Spain is demanding that the coins in Gibraltar be handed to Madrid too as national heritage.

“A lot of people wrongly think that these goods are important because it is money. No, this is all Spanish historical and cultural heritage,” said a source in the culture ministry who asked not to be named. Our wish is that as many people as possible be able to enjoy it.”

The US courts ruled that all the treasure belonged to Spain under sovereignty laws, but the claimants insist the ship was on a commercial mission carrying their ancestors’ property.

“There is a lot of case law that says that where a sovereign ship is travelling on a commercial mission, the cargo is not subject to the principle of sovereign immunity,” said Dr Feetham.

To claim the last of the treasure, Spain would have to fight for it in a Gibraltar court, a prospect complicated by diplomatic sensitivities between London and Madrid.

Spain ceded Gibraltar to Britain in 1713 but has argued it should be returned to Spanish sovereignty. Britain refuses to renounce sovereignty against the wishes of Gibraltarians. Odyssey says it is being prevented from handing over the last coins in Gibraltar to Spain because Madrid blocked them from being shipped to the US in the first place.

The Spanish booty under the sea 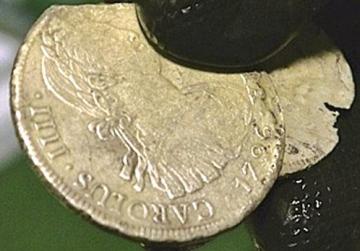 Spain has said that the coins are classified as national heritage and must stay inside the country, where they will be exhibited in one or more museums.

• The Nuestra Señora de las Mercedes (Our Lady of Mercy) was a Spanish frigate which was sunk by the British off the south coast of Portugal on October 5, 1804 during the Battle of Cape Santa Maria, while sailing back from South America with more than 200 people on board.

• Odyssey Marine Exploration claim to have discovered the vessel and recovered its treasure in 2007 resulting in a legal challenge from Spain. They claim to have recovered “over 500,000 silver coins wei­ghing more than 17 short tons, hundreds of gold coins, worked gold, and other artifacts, it is believed that this recovery constitutes the largest collection of coins ever excavated (actually ruled as an expoliation) from a deep-ocean site.”

• A US federal court and a panel from the United States Court of Appeals for the Eleventh Circuit have upheld the Spanish claim to the contents of the ship; Spain took control of the treasure in February.