The corridors of Naxxar Boys’ Secondary School are vibrating with the sound of drumming and giggling. The noise is coming from a classroom, where a score of 11-year olds are sitting in a circle with djembes at their feet and eagerly following the instructions of a drummer from Congo. 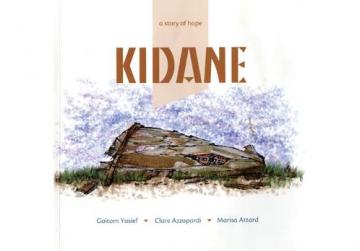 The book tell’s a refugee’s story.

In between offering instruction on how to keep tempo on the drums, Kipasa Prosper is telling them how drumming in the Democratic Republic of Congo is an important way to communicate and for many people in the villages it is just like a radio or telephone.

Mr Prosper, a refugee, voluntarily offers his time to visit schools in an outreach programme organised by the Jesuit Refugee Service, which aims to bring Maltese and refugees closer together. Usually targeted at older teens, this year JRS is holding sessions for 9 to 12 year-olds.

Ethnic activities, like drumming or hair plaiting, are preceded by sharing of experiences with refugees telling the story of why they had to come to Malta. “Until now we didn’t have the right resources to explain this to the younger children,” says Goitom Yosief, JRS programme co-ordinator.

Now the resources are here in the shape of a children’s book: Kidane – a Story of Hope which tells the tale of an Eritrean refugee. Written by children’s author Clare Azzopardi and illustrated by Marisa Attard, the book describes Kidane’s experience of fleeing conflict, crossing the desert and sea before entering Europe as an asylum seeker.

“It is based on my real story,” says the soft-spoken Mr Yosief.

He came to Malta six years ago, aged 24, and the book tells the story of his life as a student in Eritrea, his decision to flee, the perils of the trip, the sadness at not seeing his family and his wish to be a geography teacher.

The Form 1 students at St Nicholas’ Secondary School are given a copy of the book, and shown maps of the journey so they can understand better the distances. At the end, when Mr Yosief tells them he is ‘Kidane’, they bombard him with questions such as: “How did you get past the soldiers?”; “Do you have anywhere to live now?”; “Are you working as a geography teacher?”

Mr Yosief’s answers are simple but clear. The children are visibly concerned he had to leave his family behind and probe with a flurry of additional questions.

Some of the questions reflect sympathy towards the struggle faced by refugees, but some also reflect misconceptions they would have formed along the way through the media and their environment.

“But the more schools I visit and the more children I speak to, the experience is so positive that I am more convinced we need to share our stories.”

He finds it much easier to advocate human rights and work on cultural diversity with younger children than with adults.

“By then, the perception and attitudes will be already set and difficult to communicate.”

Meeting refugees with “a face and a name” is a cogent way of rebutting myths and of “thinking in a more critical way about the information they are constantly receiving”.

Still criticism is rife. The news of the launch of the ‘Kidane’ book, which has been funded by Malta Arts Foundation, was greeted with clamour that this is a waste of taxpayers’ money.

“This book is not here to help refugees,” says Mr Yosief, and he explains the aim of the book is to help Maltese children understand the causes of migration in general.

He is also keen to address the myth that refugees live off the taxpayer. “Refugees who are given asylum are allowed to work in Malta – we too pay tax and national insurance.”

Asylum protection is hard earned. “The procedure is very strict and the assessment is thorough”

Kidane – A Story of Hope will be distributed to all primary schools libraries. E-mail info@jrsmalta.org.

• Why Malta? Why you didn’t go somewhere else?
After I left my country it was necessary for me to stay in a safe place where I will be protected from deportation. It didn’t matter where this safe place was. Malta was the first safe place I reached.

• How long did it take you to come to Malta?
It took me nine months but I wasn’t travelling all the time. The shortest but most dangerous part of my journey was crossing the guarded border of my country. The only way for me at that point was to travel in an irregular manner across the Sahara desert and the Mediterranean.

• Do you miss your country?
I wouldn’t have left my country in the first place if I wasn’t forced to. I can’t go back unless things change. It’s not easy to leave everything you had behind.