Theatre
The Life and Death of Martin Luther King
MCC

There are some people whose influence is so powerful and lasting that it outlives them and keeps having a very positive effect, beyond their deaths.

Earlier this month, The American Drama Group Europe presented TNT Britain’s production of The Life and Death of Martin Luther King at the tail end of Black History Month, in one of the halls at the Mediterranean Conference Centre.

Written and directed by Paul Stebbings with dramaturgy by Phil Smith, the play comes at a time when race relations and prejudices are rearing their ugly heads once again on American soil with the Trump campaign leering out of the shadows of the Ferguson riots and gaining frightening momentum, to the rather more materialistic #OscarsSoWhite trending on Twitter.

Sadly the international stage has extended to Europe with the refugee crisis of the Syrian diaspora and the Mediterranean graveyard.

With an original score by John Kenny, which cleverly outlined the musical background of both Martin and his wife Coretta King, and its effectiveness as a tool in strengthening resolve and solidarity at rallies and meetings, this play was as much about awareness as it was about biography.

The stage was simply structured with a mostly white-washed set, which drove its subtle message home all the more. This was a production which relied heavily on voice and characterisation, with performances coming across as cautiously constructed biographical interpretations, aimed at showcasing the humanity of the private individual behind the public persona.

Adrian Decosta played Martin Luther King in a most earnest, committed manner but his trained RP accent could not be quite masked by the Alabama drawl which he used convincingly for the most part. I enjoyed the honesty which he gave to a character who, as a great leader, is very hard to live up to in stage interpretations. Dacosta successfully infused MLK’s persona with humanity and authenticity as a fallible man with his own worries and vulnerabilities, and not simply a role model.

Prince Plockey as the Rev. Ralph Abernathy, one of MLK’s most ardent supporters and advisers, was equally up to the challenge in his solid, likeable interpretation. In addition to playing his bodyguard, Sonny, Edd Muruako impressed me more with his doubling of several characters, in particular the racist bus driver and sheriff, who treat Rosa Parks and later MLK with equal disdain and insolence – a very relatable topic with regards to current police brutality in the US, especially against black people.

The Civil Rights Movement started a revolutionary change that is still having a strong impact and facing challenges to this day with the Black Lives Matter campaign.

One of the Movement’s most celebrated figures after MLK is Rosa Parks, the young black woman who refused to give up her seat on the bus for a white man and started the Montgomery Bus Boycott, which flung MLK into the spotlight as a public speaker for the Movement. 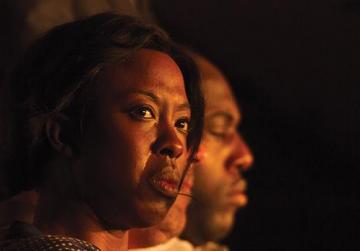 Veronica Beatrice Lewis, who played both Rosa Parks and Coretta King, MLK’s wife, did a brilliant job and gave one of the best, most nuanced performances of the evening in both interpretations of her two characters. MLK’s personal relationships with family and friends were explored not only in his incriminating adulterous affairs, documented by the FBI, but also by his wife’s unwavering support and his professional friendship with journalist Jack Nader, played by Gareth Radcliffe.

Radcliffe gave a very good portrayal of an impartial white man, moved by the charisma of a leader like King to support him and cover his campaigns. His reluctance at having been forced to spy on MLK by the FBI under physical duress and threats, as well as his faith in an honourable man, were matched by his disappointment in King when he found out that he was being unfaithful to Coretta.

The Life and Death of Martin Luther King was a performance which created the right platform for discussion about issues which are still thorny today, serving as a very good introduction to those who needed to be informed of the long history of the Civil Rights Movement and its achievements, especially in Europe. The continent is only now really beginning to experience the dangers of racial prejudice, since the Holocaust in World War II had served the purpose of uniting rather than dividing people or various countries against injustice and bigotry.

We now need to look to improve and mend our attitudes by understanding that we are all simply people, irrespective of colour, and TNT Britain, with its morning school performances, did just that: raise awareness and respect.