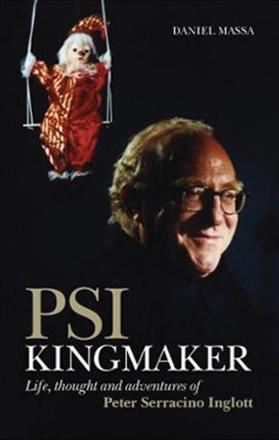 This ‘monumental’ account raises many questions about the whole enterprise of writing biographies. Although they mean to tease out ‘the truth’, biographies are ultimately narratives, literary enterprises.

This is not a book review. In this contribution I deal with the dialectic of distance and proximity, identification even, between the biographer Daniel Massa and his subject, Peter Serracino Inglott.

Massa and his highly-readable and revealing text make no secret of the fact that the biographer admires his subject, “arguably the most intelligent person in the Mediterranean”.

Massa dives into Fr Peter’s world with sheer abandon. The profusion of exclamation marks indicates the enthusiasm and respect he holds for the depth and essence of Fr Peter’s humane personality and intellect.

However, Massa is also the probing meticulous questioner teasing out the ‘defining moments’ that make biographies tick. He then shifts his focus away from his protagonist and reconstructs these stories with an eye firmly on his reader. At that crucial point, it’s a question of how he is going to write rather than who he writes about.

You see how language takes over in this alliteration-ridden paragraph at the end of a quite extraordinary story about a lavish dinner at Hôtel Lutetia in Paris in the late 1950s, with young Peter the hungry seminarian in the unlikely role of an honoured quatorzième brought in to exorcise bad luck: at that particular moment, any other job, even that of a water-carrier fellah would have been preferable to watching gourmands, goulu gluttons and goinfre greedy-guts drooling over an exquisitely sad litany of roasted ortolan songbirds!

This is preceded by a more explicitly self-conscious inter-vention by the biographer.

“His mind was in a whirl – no doubt a slightly extended limerick recording his disgust would have risen unbidden to his lips.”

And then Massa proceeds to actually write just such an ‘extended limerick’. 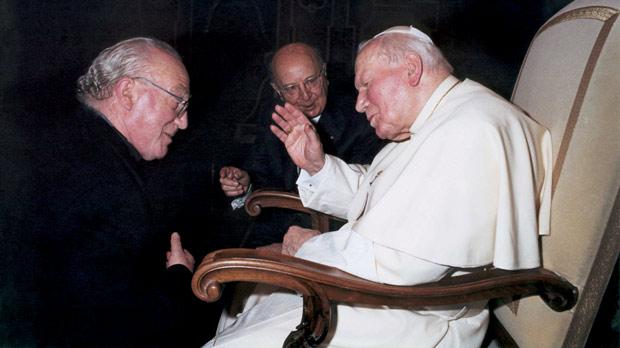 Senator Bersani introducing Fr Peter to Pope John Paul II as the only priest on the European Convention in 2005.

There is much that is autobiographical in PSI Kingmaker. Firstly, because Fr Peter’s first-hand accounts mark practically all the stories told by his biographer. The biographer listens and reworks what respondents say about his subject, close friends or people who disagreed with him, such that in Massa’s account, biographer and subject come to share many views.

For instance, when Fr Peter was not reappointed adviser when Alfred Sant was elected prime minister, Massa exclaims that this was “A pity!” – even though Sant perceived Fr Peter, unsurprisingly, as a political appointee and “part of a Nationalist think tank”. Massa believes that with his “astute mind as a political analyst” Fr Peter “may well have guided Sant round the pitfalls Dom Mintoff was busy digging out for him”.

In the 1984 special edition of Sigma, Marziano Guglielminetti described biography as a “bastard and imperfect product”. Others described the biographer as a “vampire”, and the readers as “voyeurs”. Massimo Romano argued that the biographer sucks from the blood of his subject those cells necessary for their mutual nourishment.

PSI Kingmaker: Life, Thought and Adventures of Peter Serracino Inglott confirms these anxieties about the eclectic nature of biography.

Massa inevitably blurs the distinction between the ‘non-fictional’ genres of narrative, like history, biography, auto-biography, reportage and fiction. He adopts a vast array of literary devices and narrative strategies like typology, anachrony, dialogue and different narrative voices, tones and rhythms.

PSI Kingmaker is fraught with allusions that connect this narrative to his subject’s favourite authors. It’s a text that engages with many other texts and our reading is enriched and extended by them. Positivists and rigid literary critics might cringe because Massa, both as a close friend of Fr Peter and as a creative writer in his own right, refuses to not get involved.

It is precisely in the multifaceted character of its form, that PSI Kingmaker, by a leading poet and academic, is at its very best. Massa’s engaging account is the result of years of painstaking work, hundreds of hours of interviews, heaps of old documents, diaries, manuscripts and extensive private corres-pondence, as well as visits to Fr Peter’s haunts in Oxford, Innsbruck, Paris and Milan that manifest the biographer’s total engagement.

This is how PSI Kingmaker deserves to be read: with the critical eye and passion that one would associate with Fr Peter, Massa and the unerring vampiric thrust that goes for the jugular.