The Collegiate Basilica of Birkirkara’s outstanding 19th-century wooden polychrome statue of St Joseph, which dates back to 1826, stands impeccably conserved. A notable work of art by leading architectural sculptor Vincenzo Dimech (1768-1831), it was created by the mind responsible for some of the most important civil and ecclesiastical artistic works of the time, including the monument of Judge Joseph Zammit at Valletta’s Upper Barrakka, the sculpture at the monument of Alexander Ball at the Lower Barrakka, and the titular statue of St Publius at Floriana parish church.

Birkirkara’s St Joseph is unique in that the saint is depicted wearing pants instead of the iconographical tunic dress. The statue displays a high level of workmanship in carving technique, possessing impressive anatomical attributes and details that give it a dynamic, life-like quality. From the masterful execution of flowing drapery that envelops St Joseph’s body to the semblance of living movement in body positioning and tender hold on the expressive baby Jesus, the polychrome structure simulates reality to a striking degree, enhancing an illusion of life and adding to its fine artistic quality.

The sculpture’s recent conservation and restoration was entrusted to Atelier del Restauro with the aim of recovering its original artistic value. The challenging interventions, led by Maria Grazia Zenzani and Valentina Lupo, started in September 2015.

The team initiated the project by considering the sculpture’s materials. Since it was made from wooden blocks and assembled by glue and nails, it was deduced that probably the construction incorporated an empty space in the centre so as to avoid excess weight and minimise the effects caused by the natural movements of the wood. Scientific analysis on a sample taken from the base showed that it was made from pine wood. However, other types of wood could possibly have been used in other areas of the sculpture.

Various damages were identified, including accidental damage and weakening caused by the natural movement of the wood. These contributed to endanger the sculpture’s stability. The team discovered that joints at the base were open, and there were cracks, splits and checks in several areas of the sculpture. Moreover, some of the smaller anatomical elements, such as the fingers of the Baby Jesus, were in the process of detaching.

Works began by injecting a two-component epoxy-resin in cracks in the wooden support. The specifically formulated substance is ideal for grouting and bonding wooden artefacts subject to movement generated by thermo-hygrometric variations, as was observed in this case. 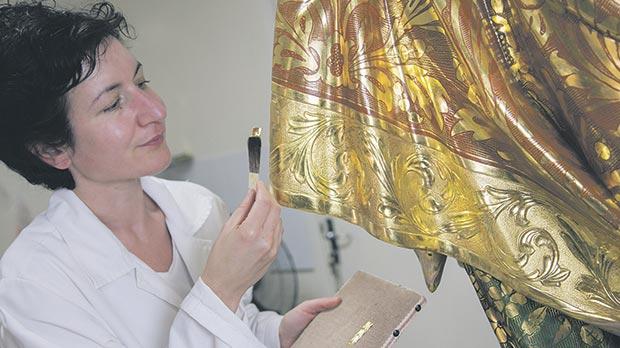 This was followed by the adhesion of detachments. First, various tests were carried out on how best to soften the thick scales of detaching paint, which were in danger of cracking completely. The ensuing treatment consisted of localised injections of conservation-standard microemulsion beneath the detaching paint, which allowed the preparation to soften and get the right adhesion without risking breakage. Adhesion of detachments was then carried out using a small heated spatula.

The statue displays a high level of workmanship in carving technique, possessing impressive anatomical attributes and details that give it a dynamic, life-like quality

The cleaning phase came next, which was complicated by the stubborn layers of shellac varnish applied in past interventions, including the extensive use of purporin over gilded areas.

Interestingly, cleaning of the skin tones of both St Joseph and Baby Jesus necessitated a different treatment to that of the vestments, as preliminary tests found that they had been painted over twice using a tenacious oil-based paint. Cleaning tests revealed the original, lighter skin tone underneath, and the team undertook a meticulous and demanding cleaning process to bring the beauty of the original skin tone to light once more, while retaining precious signs of age.

The process included two different cleaning interventions for the removal of each overpainting, ensuring the original polychromy and the patina of time was safeguarded. The layers of oil paint were manually removed using scalpels, and the luminous skin tone painted in soft brushstrokes was revealed. The cleaning of St Joseph’s hair and beard did away with a dark brown overpaint, revealing grey hair which ties in with his typical portrayal as an older man.

Treatments progressed with infilling a large amount of capillary cracks and lacunae, with several motifs in bas-relief needing to be reconstructed due to accidental damage. Here, a flexible gesso was used to permit elasticity of the infills when movements of the wooden support occur. Where losses of gold were present, a water-gilding integration was carried out using double 23¾-carat gold leaf in Armenian yellow and red bole. 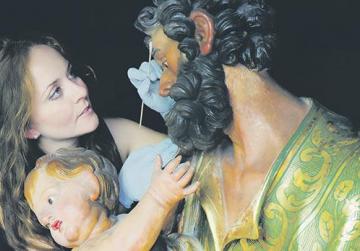 New gilded areas were balanced with the original gold using light glazes of varnish colours to age and integrate the new intervention with the original gilding. Pictorial integration was carried out on abrasions and lacunae to bring back the chromatic integrity of the polychromy by means of watercolours. In areas were the sgraffito motifs were lost, integration was carried out by reconstructing lost motifs.

To finish, the statue was coated using low molecular weight resin, with a high resistance to ageing and warm temperatures, including UV protection. A satin surface finish was chosen to protect the gilded and painted film and to saturate the colours.

All materials used by the team in this project have the common characteristic of reversibility. The project was performed in accordance with the ethical principles for the protection and preservation of a work of art, following the European Confederation of Conservator-Restorers’ Organisation’s (ECCO) code of ethics.

Such works of art are a unique marker of our past and traditions, and cannot be reproduced or recreated. It is for this reason that we are committed to safeguard such pieces that contribute to cultural distinctiveness and form part of the Maltese identity, showing them respect by implementing a conservative, respectful approach, protecting them for future generations to appreciate.

The inauguration ceremony will take place next Sunday at 6.30pm. The statue will be taken in procession from the parish church of St Joseph the Worker to St Helen Basilica, Birkirkara.