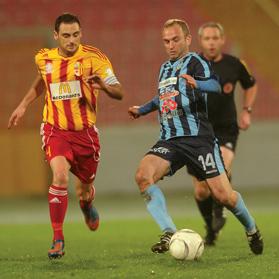 Birkirkara are not home and dry yet but this felt like a defining moment in their quest to retain the title.

Certainly, their fans thought so as they indulged in chants of ‘championi, championi’ after their team surged 3-1 ahead in their tricky clash with Sliema Wanderers last night.

Having seen Valletta lose further ground after a 2-2 draw with Mosta, Birkirkara knew that a win would propel them five points clear at the top with only seven games left.

Despite their favourites tag, this was not expected to be an easy ride as Sliema had already put a spanner in Valletta’s title bid after holding them to a 1-1 draw but Birkirkara looked the part as champions-elect with another terrific performance, one that was embroidered with some fine goals, starting from Edward Herrera’s stunning opener to Jhonnattann’s game-clincher after a string of slick passes.

There were no tactical changes from Paul Zammit as his team lined up in a 3-4-1-2 fashion with Herrera pushing up the right wing and Ryan Scicluna operating behind the front duo of Jhonnattann and Shola Shodiya Haruna.

The most creative stuff came from Birkirkara in the opening exchanges and they duly broke the deadlock on 12 minutes courtesy of a magnificent strike from Herrera.

There seemed little danger for Sliema when Birkirkara lofted the ball towards the edge of the box but Herrera swivelled before summoning a thumping drive that glanced off the underside of the bar and into the net.

A goal down, Sliema looked somewhat confused, struggling to get to grips with Birkirkara’s unyielding pressing.

Sliema had the ball in goal when Alex Muscat’s shot sailed into the net but referee Adrian Azzopardi had stopped play for a foul by Ohawuchi.

The Nigerian’s grounder was then saved by Justin Haber.

The score became even on the half-hour. Ohawuchi used his speed and agility to veer infield from the left before hammering past Haber.

The game now became a war of attrition with scoring chances few and far between, but, three minutes from half-time Birkirkara were back in front.

Paul Fenech ghosted into the box to meet Zach Muscat’s dipping cross from the right before placing his header beyond Bonello’s reach.

Birkirkara would have increased their lead in the opening minute of the second half had it not been for Bonello who smothered away Jhonnattann’s flick.

But 12 minutes into the second half, Birkirkara pulled further clear. It was an excellent move as Jhonnattann chipped the ball to Muscat who returned the pass to the Brazilian with a clever back-heel. The next thing the ball was in the net as Jhonnattann’s delightful shot had the better of Bonello.

Ohawuchi might have reduced the deficit for the Wanderers but his drive from the distance went wide.

The Stripes threatened to go three goals up but Nikola Vukanac’s header, from Jhon-nattann’s corner, was warded off by Bonello.

Haber then blocked a shot from Trevor Cilia but it was Birkirkara who continued to produce the better opportunities.

Haruna exchanged passes with Herrera whose close-range effort was stopped by Bonello. The danger refused to go away for Sliema as Jhonnattann laid the ball back for Scicluna who skewed his shot over the bar.

Sliema protested for a penalty when Vladavic fell at the merest hint of a challenge by Muscat. Referee Adrian Azzopardi was unimpressed.

As the minutes ticked away, Birkirkara switched to hold-what-you-have mode with Zammit also affording the luxury of withdrawing Haruna and Jhonnattann.