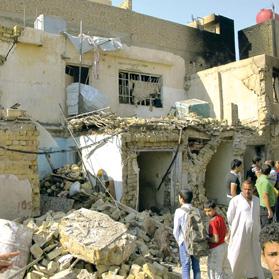 A dozen bombings in Iraq killed 55 people yesterday as the Prime Minister prepared to travel to Washington to seek President Barack Obama’s help in confronting a wave of sectarian violence fuelled by Syria’s civil war.

Killings, mostly blamed by the Shi’ite-led government on Sunni Islamists from al-Qaeda, are running at daily rates not seen in five years and Nuri al-Maliki will ask Obama on Friday to speed up promised deliveries of drones and F-16 jets that he believes can help staunch the long desert border with Syria.

Iraq’s own security forces, trained and equipped by the US troops who withdrew in late 2011 after a nine-year occupation, have been unable to prevent a surge in violence which has taken the civilian death toll so far this year to about 7,000. Sealing the Syrian border would only address part of the problem.

Yesterday, police reported 11 vehicles blowing up in mainly Shi’ite Muslim areas in and around Baghdad, killing 41 people in an apparently coordinated series of explosions typical of al-Qaeda.

A further 14 people were killed when a suicide bomber drove up to a line of soldiers waiting to collect their pay from a bank in the northern city of Mosul and detonated his car.

In the worst of the attacks in the Baghdad area, two car bombs exploded moments apart near a busy market in the town of Nahrawan, south of the capital, killing seven.

In Baladiyat, where another car bomb killed three people, a woman living nearby spoke of a terrifying start to the working week: “I was eating my breakfast when a powerful blast shook the building, shattering the window of my apartment and covering the dining table with glass,” said Suad Ahmed. “I was terrified. I heard women and children shouting next door. I started to cry.”

Violence between the Sunni minority, long dominant in Iraq under Saddam Hussein and before, and majority Shi’ites empowered through elections promoted by Washington peaked four years after the US invasion; the monitoring group Iraq Body Count recorded over 29,000 civilian deaths in 2006 and 25,000 in 2007.

Having steadied to a monthly average of 300 to 400 deaths from 2009 to 2012, tolls have close to doubled since violence in April, when government forces stormed a camp where Sunnis were protesting at what they see as their political marginalisation.

“The deterioration of security in Iraq is one of the shockwaves of the Syrian crisis,” said Shakir Salman, a former general who advises Iraq’s Defence Ministry. “Al-Qaeda is working now to undermine Maliki’s government because they think this is one way to accelerate the fall of the Syrian regime.”

Sunni militants from al-Qaeda are on the attack, targeting Shi’ites

Maliki, a Shi’ite who lived in exile in Iran and Syria while Saddam was in power, accuses al-Qaeda and Sunni rebels fighting Syria’s Iranian-backed President Bashar al-Assad of arming and aiding militants in Iraq.

Aides to the prime minister say he will ask Obama to speed up supplies for Iraq’s air force in order to protect its western border.

“The first thing the prime minister will ask for is to accelerate the pro­cesses for the shipment of drones and F-16s,” Deputy National Security Adviser Safa al-Sheikh Hussein said in an interview last week. “The initial response from the US was positive, but it depends on the delivery time. We want them now.”

Washington agreed in August to supply by late 2014 a $2.6 billion integrated air defence system and F-16s. The US, which a decade ago hoped to turn Iraq into a beacon of democracy for the Middle East, has struggled to maintain its influence in Baghdad as Maliki has developed ties with Washington’s adversaries in Shi’ite Iran and turbulence elsewhere in the region has demanded US resources.

Hussein said that if the US could not provide the weapons Iraq wanted, Baghdad could turn to others; Russia, Assad’s main armourer and once a supplier to Saddam, already has a $4-billion deal for helicopters and other equipment.

Obama has demanded Assad step down but has stopped short of military action that could help the rebels to victory. Maliki is likely to urge him to press harder for a negotiated end to Syria’s conflict and to curb the influence of Sunni militants there.

The two men will meet at a time when diplomatic alignments in the region have been shifting as a result of the Syrian war – part of the broader challenge to authoritarian Arab rulers since 2011 – and Western efforts to curb Iran’s nuclear programme.

Sources close to Maliki, who is positioning himself to win a third term at an election next year, said he may present himself to Obama as a figure who could help Washington explore further a detente with new Iranian President Hassan Rouhani.

Talk of a US rapprochement with Tehran, as well as Obama’s decision to step back from military action in Syria last month, has alarmed traditional US allies in the region, notably Israel and Iraq’s Sunni-ruled southern neighbour Saudi Arabia.

Iraqi officials have accused Riyadh and others in the Gulf of funding Sunni groups in Iraq, as well as in Syria.