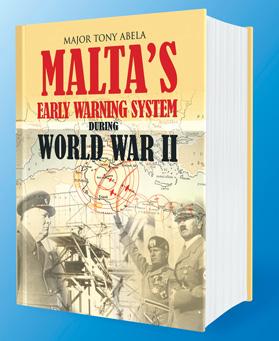 The story of the role that Malta played in helping Britain make full use of radar equipment during the war is told in a new book: Malta’s Early Warning System During World War II.

Researched by Major Tony Abela, a former RAF telecommunications technician, it is based on information unearthed from hundreds of secret documents which, until now, had been stacked away for seven decades at the British National Archives.

“The book is set to make a little bit of history,” says a spokesman for the publishers, SKS Publication. “Back in 1940, the invention of radar was pure magic, a painstaking achievement with consequences of unprecedented proportions.

“Far more than the atomic bomb, radar contributed to the Allied victory in the war. It was also the precursor of modern technology.

“It is no overestimation to state that radar eventually changed the lives of millions and that Malta played a pivotal role in the development and successful use of radar by the British.”

Without elaborating, he points out that the book “narrates a story never told before”.

“Moreover, it dispels some of the myths about Malta’s early wartime experiences and makes some new bold proposals for a revision of our history books,” the publishers say.

Malta’s Early Warning System During World War II will be on sale at all major bookstores.