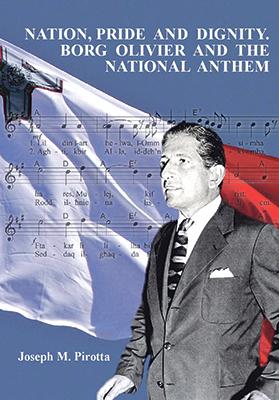 Compared to Joseph M. Pirotta’s great multi-volume history of Malta’s political road to independence, the long-awaited final volume of which should thankfully soon be published, the present volume (which details Gorg Borg Olivier’s long fight to obtain official recognition for the Innu Malti) is something of a footnote. But then, as scholars know, footnotes can often be of crucial importance in understanding the larger picture.

What does emerge is a most positive assessment, if any were at all needed, of the figure of Borg Olivier, who has often been unjustly described as too weak in his dealings with the British colonial powers. Borg Olivier’s quiet, but determined, sticking to his points reflected a strong-minded character who would wear his opponents out with a pacific serenity. Too many people tend to unjustly compare his approach to the fiery bluster of Dom Mintoff and the latter’s tendency to shoot from the hip.

Colonial Secretary Oliver Lyttleton had to acknowledge that he had never met another negotiator like Borg Olivier in all his 59 years. It was an approach that ultimately quite often made friends of opponents; Mintoff’s would often end by making enemies of friends.

The material covered in this book was a serendipitous discovery in the course of Pirotta’s far-flung research, both locally and in London. It is an aspect of our recent history that has never been treated before and the author deserves our credit for teasing it out of oblivion and making such an interesting book out of it. Moreover, as we have come to expect of Pirotta’s books, it is meticulously researched and carefully and elegantly written.

What has never been doubted is Borg Olivier’s nationalistic spirit and his desire to see his party’s dream to see Malta shake off its colonial trappings and assert its nationhood. The Nationalist Party’s demand for dominion status in the 1930s was nothing less than a demand for independence on the same footing as, for example, Canada, a demand which many then deemed foolhardy.

Malta had all the requirements for statehood to acknowledge a people apart in the light of the nationalistic movements that had seen such a powerful surge in the mid-19th century. It had its own millennial language which had developed its accepted alphabet and was slowly creating a literary dimension of some worth, while its red-and-white flag had been recognized as a national symbol since late medieval times.

Moreover, their faith, which the Maltese proudly claimed to go back to apostolic times, provided the third dimension of a unifying identity. In 1921 as well, the newly set-up Legislative Assembly had declared September 8 as Malta’s National Day. In the 1920s Dun Karm and Robert Samut had collaborated on a hymn that the people soon started to recognise as their national anthem but which the British would for long try to suppress to give sole prominence to God Save the King.

And yet the colonial administration did offer a small sop to Cerberus when, in 1941, four months before the fascist bombs started to fall on Malta, the Innu Malti was granted the status of “the special national anthem of the Maltese”, to appease the population in the trying days that were to come, but its use was to be restricted to formal occasions of a purely Maltese nature.

It was in this context that there occurred the famous incident which has become a local legend thanks to Rużar Briffa’s fine lyrical poem – Jum ir-Rebħa. The poem immortalised the incident when, during a football match on March 25, 1945, the band failed to play the national anthem. The crowd responded by singing it out loud.

Borg Olivier, who had almost single-handedly tried to resist the illegal deportation of Maltese nationals to Uganda in the war, ended up as prime minister in December 1950 following the death of Prime Minister Enrico Mizzi from which position he could continue to seek recognition for Malta as a nation.

Although Britain was then experiencing the unravelling of its empire, there was still a great reluctance to accept the inevitable and tiny Malta was considered by Whitehall as an essential cog in asserting its naval dominance.

On the other hand, Borg Olivier’s insistence that the Innu Malti should be given full recognition as a national anthem to be played in official occasions was obviously part of his ploy that would lead to the de facto acceptance of Malta’s international status. Pirotta’s book excellently and minutely records this tug-of-war, an aspect of our contemporary history that has been overlooked hitherto.

A parallel occasion arose in 1953 when Borg Olivier initially refused the invitation to participate in the crowning ceremony of Queen Elizabeth because he was offered a place with the colonies and that the blue colonial flag was to be used rather than Malta’s national colours. In this war of wits, Prime Minister Winston Churchill blinked first.

Locally, no occasion would prove too small for him to strongly insist that the arrival of the Maltese prime minister at official functions should be greeted by the Innu Malti, playing a game of cat-and-mouse that one feels that Borg Olivier inwardly cherished, since it gave him the chance to cock a snook at the colonial masters while holding on to his moral high ground.

The Queen’s birthday parade in 1954 was another occasion when Borg Olivier could play a trump card with the whole event resolving itself into almost a farcical shambles with the matter finding its way to both houses of the Westminster parliament.

Borg Olivier would have his moment of glory when the Innu Malti was entrenched in the Independence Constitution requiring a two-thirds majority to remove it. But even in 1964 incidents continued to arise because of Malta’s monarchical Constitution which, some would argue, should give precedence to God Save the Queen.

There the story should have ended, but the Republican Constitution of 1974 failed to entrench the Innu Malti because as Anton Buttigieg speciously argued, ‘the people should have a right to change or replace their national anthem’. This may have been a further reason as to why Borg Olivier and a handful of Nationalist MPs voted against the new constitution.

Pirotta weaves a good detailed narrative through the various incidents, while the text itself is enriched by various illustrations with not a few being taken from the author’s own collection.