As the Omega countdown clocks in Trafalgar Square and Greenwich tick away the seconds till the beginning of the opening ceremony of the London 2012 Olympic Games, Omega’s timekeeping and data-handling professionals are preparing for the competition where, for the 25th time, the Swiss specialists will serve as official timekeepers at the Olympic Games.

Omega is synonymous with sport and adventure. The Swiss watchmaker’s 164-year legacy includes countless precision records, conquests of space and the oceans’ depths and, of course, sports timekeeping.

Omega has also made and recorded the history of the Olympic Games, starting with its first Olympic Games timekeeping assignment for the Los Angeles edition in 1932 – here, only 30 chronograph stopwatches were used to time each event.

Fast forward to this year’s London Olympic Games, and Omega will be deploying more than 450 professional timekeepers and data handlers supported by nearly 400 tonnes of equipment.

The London Olympic Games are set to be among the largest ever, hosting some 10,500 athletes and officials from more than 200 countries. To meet the challenge, Omega will introduce a number of technological innovations.

One of these technologies is the Quantum Timer. With an enhanced resolution of one millionth of a second, the Quantum Timer and the Quantum Aquatics Timer mark the beginning of a new generation of Omega timing products. The resolution is 100 times greater than with previous devices. The Quantum also delivers precision of 0.1 parts per million – this means that there is a maximum variation of only one second out of ten million seconds.

With 16 independent clocks, 128 inputs and 32 outputs, it will be a challenge to find a sport that Quantum cannot time. The same technology that allows the Quantum to redefine cycling track timekeeping is also used in the Quantum Aquatics Timer and brings the same great timekeeping performance to water sports. 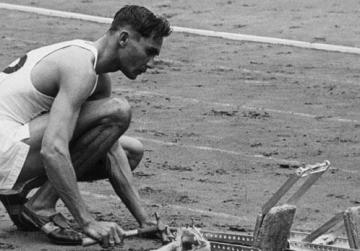 Omega is also introducing an updated athletics starting block at the London 2012 Olympic Games. The runners’ reaction times are measured entirely by the measurement of force against the back block and not by movement. The new blocks can detect the reaction times of every runner without changing any settings on the device.

Among the most challenging of the Olympic disciplines are the men’s and women’s swimming marathon. Omega’s new Open Water Gate is set up not only at the beginning and the end of the race but also in intermediate positions – thus, new intermediate times will be available.

Apart from professional timing equipment, Omega will also celebrate its role as official timekeeper of the Olympic Games with a special edition of its Seamaster Aqua Terra collection – the very first Seamaster was launched in 1948, the last time London hosted the Olympic Games. The Aqua Terra wristwatches, with the unmistakable vertical lines on their dials, are among the brand’s most popular products and the watches in the Olympic Collection will be cherished keepsakes from the London 2012 Olympic Games.

Highlights of timekeeping at the Olympic Games.

Los Angeles, 1932: Omega became official timekeeper at the Los Angeles Games in 1932, supplying 30 high precision chronographs, all of which had been certified as chronometers by the Observatory at Neuchâtel, for use across all sports. Official results were taken at fifths and tenths of a second.

Berlin, 1936: For the Olympic Games in Berlin, 185 chronographs were taken from Bienne to the German capital in a suitcase carried by 29-year-old Omega watchmaker Paul-Louis Guignard. At the Berlin 1936 Games, the great Jesse Owens (USA) memorably won four gold medals in the days when athletes dug their own starting holes with small shovels.

London, 1948: For the Olympic Games in London, the British Race Finish Recording Co. Ltd developed the first photo-finish camera, with a continuous image and a recorded speed which could be modulated according to the needs of the sport being practised, from rowing to cycling. It worked in tandem with Omega timing equipment. It was at this edition that machines began to outperform human beings for accuracy.

Helsinki, 1952: Equipment was by now capable of showing hundredths of a second below the images of athletes crossing the finish line. The era of quartz and electronics had arrived, above all with the Omega Time Recorder, which allowed the results to be printed out on a roll of paper, winning Omega the prestigious Croix du Mérite Olympique. Official times were now recorded to the nearest hundredth of a second.

Melbourne, 1956: The most spectacular innovation at the Melbourne Olympic Games was the Swim Eight-O-Matic Timer, the first semi-automatic timekeeping device for swimming with digital display – this allowed timekeepers to distinguish between two individual swimmers who finished at virtually the same time. 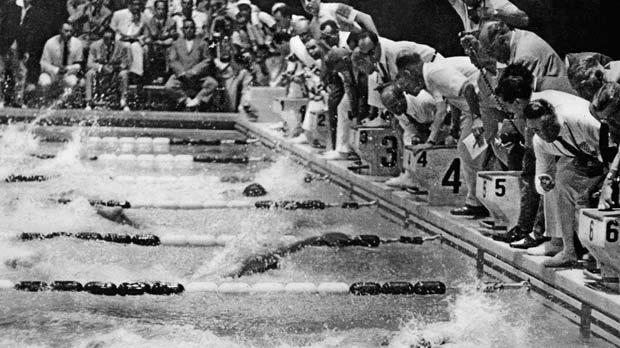 Rome, 1960: A controversial result at the 1960 Summer Games in Rome – the last Olympic competition timed by Omega to be resolved with a human-eye decision – triggered the next big innovation in the pool: automatic touch pads, also invented by the Biel-based manufacturer.

Tokyo, 1964: Invented in 1961, the Omegascope allowed the introduction of real time in televised sports, reporting by superimposing luminous numbers on the bottom of the screen – it left no margin for error because it was openly on display for millions of TV viewers. 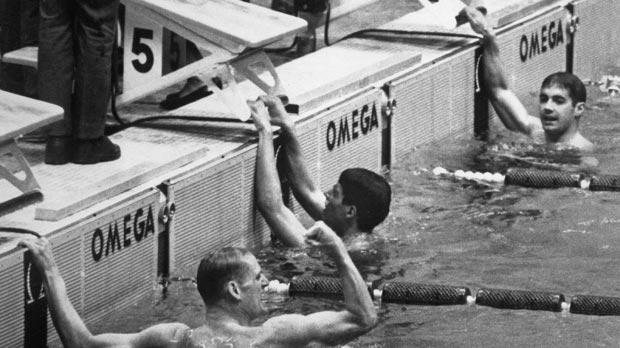 Mexico City, 1968: Integrated timing was introduced at the Mexico City Olympic Games, where automatic and electronic timekeeping was used for the first time, providing statistical analysis with results being fed to judges, coaches, media and, to some degree, the public. The most talked-about technology was the touch-pad in the pool which allowed the swimmer’s own hand to stop the clock, eliminating the need for poolside timekeepers.

Munich, 1972: Spectators in Munich witnessed the controversy of the first and only gold medal in the pool ever to be awarded on the basis of thousandths of a second which forced a change in rules. In the 400-metre medley, Gunnar Larsson, the double European champion from Sweden, and Tim McKee (USA) stopped the clock at 4:31.98. Officials then declared Larsson the champion: 4:31.981 to 4:31.983. Days later, the FINA rulebook was changed to declare that times would only be measured to a hundredth of a second.

Montreal, 1976: One of the most memorable moments came when Nadia Comaneci’s perfect score of 10.0 appeared as 1.00 on the scoreboard which wasn’t equipped to deal with a flawless performance – but everyone knew exactly what had just taken place.

Moscow, 1980: At the Olympic Games in Moscow, the new version of the Swim-O-Matic was a chronometer briefcase that weighted only 1.2 kg, compared to the whopping 150 kg of its 1976 predecessor.

Los Angeles, 1984: The Olympics in Los Angeles were the first to feature colour photofinish images whose paper prints signed by the athletes were highly prized. 1984 also saw the Olympic début of Omega’s false-start detectors. Timekeeping accuracy was responsible for the first shared gold in Olympic swimming history: Americans Carrie Steinseifer and Nancy Hogshead both clocked 55.92 seconds over the 100-metre freestyle.

Seoul, 1988: Seoul were the first Olympic Games with computerised timekeeping, results and analysis stored in databases for posterity. The Omega video matrix board boasted colour images in Seoul.

Barcelona, 1992: At the 1992 Winter Games in Albertville, speed skaters were treated to the Omega Scan-O-Vision system that digitally measured times to the nearest thousandth of a second as the skaters crossed the finish line. The system effectively photographed time by fusing time and continuous picture in a single document. This heralded a new chapter in the science of timekeeping.

Atlanta, 1996: The Atlanta 1996 Olympic Games saw the inauguration of the first global Olympic timekeeping which realised, for each sport and discipline, the timekeeping trilogy: timekeeping, data handling, and distribution of the results.

Sydney, 2000: The Sydney Olympic Games saw the introduction of Omega’s Live Timing at www.omegatiming.com. Within 15 seconds of a swimmer touching the pad, a complete set of splits, ranking, and information on records was available to a global audience to read online and download. Technology allowed TV viewers to see a line across the picture that indicated how close athletes were to world records in some sports.

Athens, 2004: The radar gun, which had already been used at tennis events, made its debut at the beach volleyball events at the 2004 Olympic Games in Athens.

Beijing, 2008: In Beijing, among the many improvements to the world of sports timekeeping were high-speed cameras along with new timing, scoring and false start systems. GPS systems and bib transponders were also used to great effect.