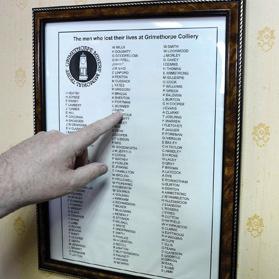 The names of men killed at Grimethorpe pit are displayed at the locality’s Working Men’s Club.

In an old-fashioned social club near what was once one of Britain’s richest coal seams, former miners played cards and toasted the death of their hated old foe, Margaret Thatcher.

The past looks down solemnly from the walls: a framed list of the names of men who died underground hangs near a flag of the shuttered colliery that once employed 6,000.

Thatcher, the most polarising Prime Minister in modern British history, is nowhere more thoroughly despised than here, in northern England’s coal belt, where her crackdown against striking miners is blamed for wiping out an entire industry that had sustained a community for generations.

After its mines were shut, Grimethorpe was named one of the most deprived villages in Europe, its despair immortalised in the 1997 Ewan McGregor film Brassed Off, in which one laid-off miner, forced to work as a children’s party clown, laments that his father lies dying yet “Margaret bloody Thatcher lives!”

Twenty-two per cent of the working age population relies on state benefits, now being cut by the new Government in London led by Conservative heirs to Thatcher

Today, all that is left of the Grimethorpe colliery is its brass band, which was featured in the film and still travels around England and abroad for concerts.

After all, the area had been through came the 2008 economic crisis, driving local unemployment back above 10 per cent. Twenty-two per cent of the working age population relies on state benefits, now being cut by the new Government in London led by Conservative heirs to Thatcher.

Linda Burgess, a local councillor from Thatcher’s old foes, the Labour Party, says the hardest part of restoring prosperity to the area has been undoing the psychological legacy of years of joblessness and despair.

“It is inevitable when you get the devastation of taking away the mines and the essence of communities and families, there is bound to be some depression, bound to be some lack of confidence and that takes some building up,” she said.

Still, there are signs of a new economic future taking hold. Up the road from the social club, Richard Meads, 34, runs CrazyHorse Creative, a graphic design agency he co-founded last year, which sets up websites for nearby engineering firms.

“It’s a nice vibrant space to work in. It’s modern and inspiring,” he said of the Barnsley Digital Media Centre, an office building opened in 2007 by the local authorities to attract hi-tech start-ups.

Victorian cottages, once home to generations of mining families, have been torn down. But new houses, ranging from starter homes to five-bedroom properties, have been built. At the shuttered mine where hundreds of men used to descend to the coalface for each shift, there are new industrial sites.

Symphony Group, a furniture company, built a factory and distribution hub in the area in 2008, making fitted kitchens and bathrooms. It says it employs 900 people and earns a turnover of £100 million (€117 million).

A €147 million new shopping centre is back on track, after being delayed because of the 2008 credit crunch.

Gareth Scargill, who runs the Digital Media Centre, says the office space has done well, even though Britain’s economy is still mired in the difficulty it hit since the financial crisis.

“We’ve really noticed an upturn since the start of this year, and we know that the CDI (creative digital industries) sector employs more than 120,000 people in Yorkshire alone and businesses are waking up to the fact they don’t have to be based in Leeds or London to get ahead,” he said.

The area’s tentative recovery from its bleakest days is not likely to soften the local hatred for Thatcher any time soon.

“When I heard the news she had died, I shouted out ‘rejoice’,” said former miner and union leader Stephen Brunt, echoing Thatcher’s own words following a victory in the Falklands War. “She absolutely decimated mining communities with her policies and we will never forgive her.”

The coal industry – foundation of British prosperity since the Industrial Revolution – had already been in decline for decades when Thatcher took power in 1979. Coal, like other big industries, was in the hands of the state and losing money.

Britain was emerging from the ‘Winter of Discontent’, when strikes caused rubbish to lie uncollected in the streets and bodies to go unburied. A coal miners’ strike in 1974 had led to a three-day working week to save electricity.

Thatcher denounced union leaders as “the enemy within”, and was determined to crush them when they took the miners out on strike in 1984 to prevent the closing of money-losing pits.

With the backing of the right-wing press, she shipped thousands of police from around the country to guard those miners who carried on working.

Former miner Paul Winter remembers the bloodiest battle, at Orgreave coking plant in South Yorkshire on June 18, 1984. He was 19 when he stood at the picket line, which was charged by baton-wielding police on horses.

“The full weight of the state was against us,” Winter said in the library of the college where he now works. “The whole heart and soul was ripped out of the union movement.”

After the strike collapsed, the coal industry was not merely cut back, it was wiped out. When Thatcher took office, Britain had nearly a quarter of a million coal miners. When she left, there were barely 50,000. Today only a few thousand remain.

In Barnsley alone, more than 16,000 mining jobs were lost in the decade following 1984, reducing mining from nearly a quarter of all jobs to zero. The number of people with any job remains below the level of nearly 30 years ago.