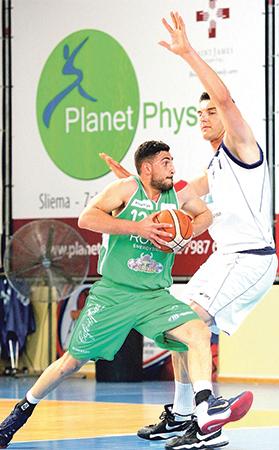 BUPA Luxol maintained their winning streak in the play-offs after overcoming Floriana in the opening game of the 2017 BOV Finals.

The Greens did try to offer a stern challenge and had their good moments in the game.

But Luxol managed to open a mammoth double digit lead in the third quarter, only for Floriana to pull up their socks once again but their rally just came up short.

The finals got off with sharp long distance shooting from Luxol as four different players managed to respectively score early from downtown.

However Floriana were not overawed and soon started piling up the points, led by Canadian Chad Patus who potted eight points, including two treys.

Minutes later, Floriana went on to take the lead following a Dirk Schembri close-range basket and this marginal advantage was maintained till the end of the first quarter, 18-16.

Luxol started winning the defensive boards in the second quarter and had their towering pivot Samuel Deguara more in the action as they overturned the score with a 13-2 run.

Despite Floriana’s treys from Patus and Nikola Vasovic, who both played throughout the whole match, there was still a nine-point margin between the two finalists at the interval, 40-31.

Luxol maintained their tempo when play resumed and led by their trio Cumpstone, Deguara and Ahlberg, who all were on the court for the whole 40 minutes of playing time, they had another positive run, this time 14-2, to open a hefty 21-point margin, 54-33.

Floriana did not throw in the towel and they retorted with nine consecutive points, managing also to bring down some offensive rebounds and the margin came down to 60-46 at the end of the third quarter.

The last quarter produced the most points of the lot.

Floriana put in a good effort to try to claw themselves back into the game and were momentarily managing to find their way to the opponents’ basket. An 11-2 mid-quarter run moved the Greens closer to their opponents.

However Luxol did not let the game slip away and obtained some important hoops as they administered their advantage till the final buzzer.

Game 2 of this best-of-five finals series will be played tomorrow at 7.30pm.