Greeted with overwhelming indifference in Europe, the Club World Cup is still seen as the pinnacle of club football elsewhere as thousands of San Lorenzo fans demonstrated last week. 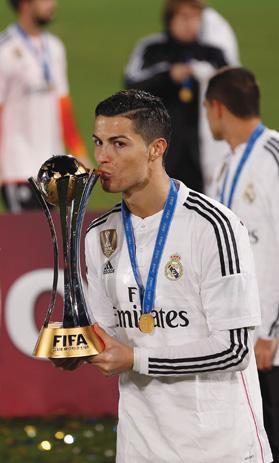 An estimated 9,000 San Lorenzo fans made the tortuous and costly trip from Buenos Aires to Marrakech to witness what they believed was the most important week in their club’s history.

Goalkeeper Sebastian Torrico said before Saturday’s final against Real Madrid, won 2-0 by the European champions, that it would be “the most important game of my life” and coach Edgardo Bauza expressed similar sentiments.

“It’s the match all the players want to play. This is the most important game at club level,” he said.

“At my age this is like touching heaven,” added 34-year-old team captain Juan Mercier.

San Lorenzo had become almost obsessed by the tournament since winning the Libertadores Cup five months ago.

Until the 1990s, the South American champions used to compete on equal terms with their European counterparts and led by 13 titles to 12 when the old Intercontinental Cup was scrapped in 2004.

But Europe leads 7-3 under the new format, reflecting the huge gulf which has been caused by the continued exodus of top players worldwide towards Europe.

The December timing of the tournament also does not help.

While the European sides reinforce their teams in the six months between winning the Champions League and taking part in the club cup, the opposite happens with teams from the rest of the world where winning a title means the best players get sold.

Asian champions Western Sydney Wanderers have yet to win a league game this season and Moghreb Tetouan, who qualified as champions of the host nation, are 10th in the Moroccan league and had not won in five games going into the tournament.

Nevertheless, the chance to pit themselves against teams such as Real remains a huge pull for the likes of San Lorenzo and their mainly journeyman players.

Predictably, Real Madrid sailed through their two matches without conceding a goal, beating Cruz Azul 4-0 and San Lorenzo 2-0, reinforcing the concept that the tournament is uncompetitive.

In fact, Real probably encountered less resistance in those two games than they would in a typical La Liga game or Champions League group stage tie.

Bauza pointed out that it is not just teams from other continents that succumb to Real’s array of cherry-picked, world class players as the Spaniards had won their previous 20 games going into the tournament.

The San Lorenzo coach said there is also a huge gap between the elite group of European teams, such as Real, Barcelona and Bayern Munich, and the rest of their own continent.

“The big difference is between us and the four or five best teams in the world, not all the European teams,” he said.

“If you take out the top four or five, we could play a match on equal terms against almost any European opposition.”

Auckland City were another team who had no complaints about the tournament after the New Zealanders surpassed all expectations and finished third after wins over Moghreb Tetouan, ES Setif and Cruz Azul.

“It’s a luxury to come to a tournament like this and play against high level team,” said coach Ramon Tribulietx.