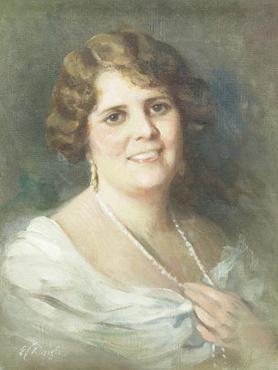 An oil on canvas painting of a typical Maltese landscape by one of Malta’s most gifted painters, Edward Caruana Dingli, is set to fetch between €10,000 and €15,000 at an auction by Bonhams.

Another oil painting by the artist, this time depicting a portrait of his mistress Olga Galea Naudi, née Barbora, is only expected to fetch between €890 and €1,100.

A watercolour painting of moored boats in a harbour was auctioned for €9,563 last December while another watercolour piece portraying a lady wearing a faldetta went under the hammer for €7,956 back in 2006.

Very few of Caruana Dingli’s portraits are on public view, but some can be seen at the Casino Maltese and the National Museum of Fine Arts.

The remainder of his voluminous output remain in the possession of the families who commissioned them. Rarely does one of the ‘private’ portraits reach the market.

Giuseppe Calì was Caruana Dingli’s mentor and inspiration. Calì encouraged him in his move towards realism tinged with romantic idealism – the soft focus ‘gauze’ through which many of the women he painted are seen, such as his portrait of Olga Galea Naudi.

Caruana Dingli married Charlotte Falzon when he was 24 years old, but although they had two sons, their marriage failed.

Olga was the wife of an ex-military man, Carlo Galea Naudi, a lawyer and lifelong acquaintance of the artist.

After separating from his wife in 1913, Caruana Dingli began a scandalous relationship with Olga that was to last a large part of his life.

It was at this time that Caruana Dingli decided to fully devote his life to art, building a successful career and becoming, in Malta, the most prominent sought-after portrait painter of his time.

As a result, various portraits of Olga can be found in public and private collections all over the world.