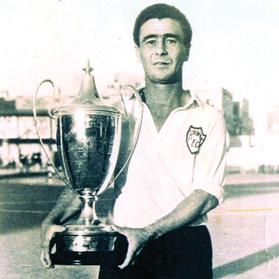 On Tuesday, the death was announced of Freddie Church at the venerable age of 89.

Church was one of the best and most sought-after strikers of the 1950s. This article is dedicated to his memory and to those old-timers from Paola who remember the exploits of this great character.

The lack of fine strikers deprived Hibs of many an honour throughout the 80-odd years of their history. Therefore, when in the late 1940s a stocky young player started to bang in the goals regularly in the Reserves League, the Hibs’ committee stood up and took notice.

The young player’s name was Freddie Church, a name that was soon to become a legend in Paola.

It was a time when every club had its quota of fine footballers. Church soon became a favourite at the Schreiber Sports Ground. His endless energy made up for his lack of height and his uncanny ‘smell’ for goals made him one of the most dreaded strikers in his era.

That season was characterised by the rivalry between Hibernians and St George’s in the third division. So, when the two teams reached the final of the category KO competition a huge crowd filled every nook and corner at the Schreiber.

Hibernians won the match 1-0. Later on, however, the MFA overturned the result because Hibs had used ineligible players but Church was rewarded for his efforts with a place in the first-team squad

He made his first-team debut on November 15, 1947 against Floriana, and marked the occasion with a goal. That season he managed to play six times for the first team, scoring three goals in the process.

The next season he won a permanent place in the first team. By now he was already established as a goal-scorer. The Hibs’ supporters went mad every time the ball hit the rigging off the head or foot of their hero.

Year after year, Church continued to produce the goods but somehow the honours always seemed to elude him.

In 1950 he was chosen to play for the MFA XI against the Pick Services. It was the first of five prestigious appearances for the national team. In seasons 1950-51 and 1951-52 he helped Hibernians reach the final of the FA Trophy but on each occasion he finished on the losing side.

In season 1959-60, Hibs had a formidable side. It seemed as if they would at last win a first-ever major honour but after losing 2-1 against Valletta in the penultimate match of the league their dreams evaporated.

Hibs and Valletta met again in the FA Trophy quarter-finals. The rivalry between the two teams reached its peak in this match.

Towards the end, with Valletta leading 2-0, trouble broke out among the players. Church attacked referee Cassar Naudi and he was sent off. The MFA dealt harshly with the Hibs’ player as Church was banned for life and for a time his career seemed to be over.

The next year Hibs won the championship for the first time in their history.

It was a tough blow for Church. Throughout his career he aimed for just that moment only to see his dream escape his grasp because of one burst of bad temper.

The next season Church received a pardon from the MFA. One whole season on the sidelines did not seem to effect his knack of scoring goals.

It was a good season for Hibs. Forming a great tandem with Jimmy Mizzi, he helped the Paolites win the FA Trophy and Cassar Cup.

By now, Church was getting on in years.

Midway through the 1962-63 season he was transferred to Rabat Ajax but with the Magpies he seemed to have lost his goal-scoring touch.

At the end of the season he was back on the move, this time to Naxxar Lions in the Third Division. He played for two more seasons before hanging up his boots forever.