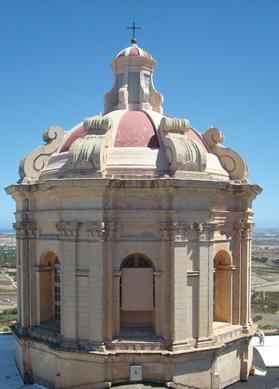 As the Knights of St John managed to make Malta a safer place to live in during the later 17th and 18th centuries, church domes grew larger and became increasingly popular.

They were transformed into important symbols of civic pride dominating the skyline of Maltese towns and villages. In conformity with St Carlo Borromeo’s guidelines of the Council of Trent, they introduced light and a sense of spaciousness into the sacred buildings themselves and have come to be recognised as one of the most characteristic architectural features of the Maltese landscape.

Kenneth Cauchi, an MA graduate in Baroque Studies, recently gave an interesting lecture on Maltese church domes in the Baroque age. The lecture, held at the Birkirkara parish centre, was part of the outreach programme of the International Institute for Baroque Studies at the University of Malta, which is being co-ordinated by Petra Caruana-Dingli. The event was introduced by Prof. Denis De Lucca, the institute’s director.

The design of domes formed part of the education and practice of the baroque-age architects working in Malta, such as Francesco Buonamici and Romano Carapecchia, as well as by accomplished Maltese architects such as Gerolamo Cassar and Lorenzo Gafa.

The novel design and building techniques of their works were admired and imitated by Maltese capomastri (master masons) all over the Maltese islands.

In his talk, Mr Cauchi described the primary elements of dome construction – the drum at the base, the dome itself and the lantern on top – as well as their stylistic features. The strength of Maltese limestone enabled the construction of single-shell domes, as opposed to double-shell domes as were commonly built across Europe.

The lecture gave a chronological presentation of the development of domes in Malta, starting from the earliest domes in Żejtun and Lija, with the main focus on domes built in the baroque age, which reached a high point in Mdina and Birkirkara.

The exterior and interior details of several important church domes resulting from his surveys, were described and illustrated.